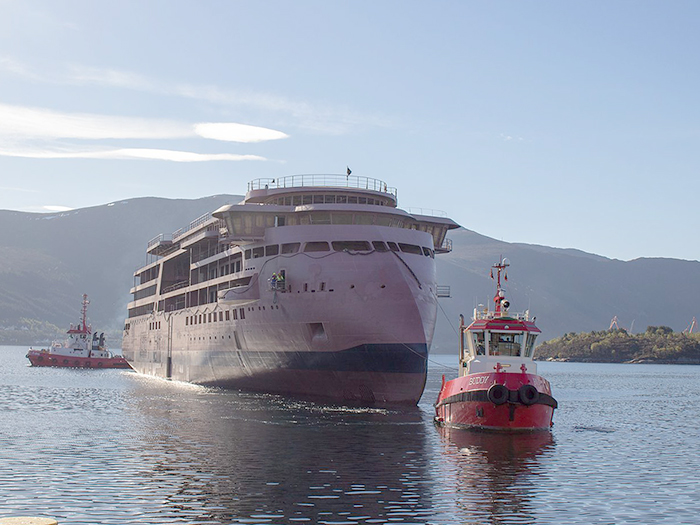 The hull of Lindblad Expedition’s first polar expedition cruise vessel has arrived at Ulstein Group’s Ulsteinvik, Norway, shipyard after traveling nearly six days from Gydnia, Poland where construction of the main hull steel work was completed. The ship arrived under tow with 100% of structure steel and major foundation work having been competed at Crist S.A.

The ship — National Geographic Endurance —currently has all bow thruster and major HVAC equipment installed. The main engines, generators, stabilizers, cranes and other essential equipment will be installed in dry dock at Ulsteinvik, along with the completed piping, electrical and hotel outfitting.

The last two steel blocks on the housetop will be erected later in the construction stage as air space becomes available at the Ulstein shipyard. The ship is scheduled to be delivered at the end of January 2020.

Lindblad recently announced an agreement with Ulstein on the design and construction of a second polar vessel, due for delivery in 2021.

National Geographic Endurance is the first polar vessel to feature the Ulstein X-bow.

The X-bow was originally created for offshore vessels in the North Sea with the goal of maintaining speed and comfort in some of the world’ s wildest seas. This ability will give passengers a smoother ride through areas with potentially harsh weather as the vessel transits to remote polar areas.