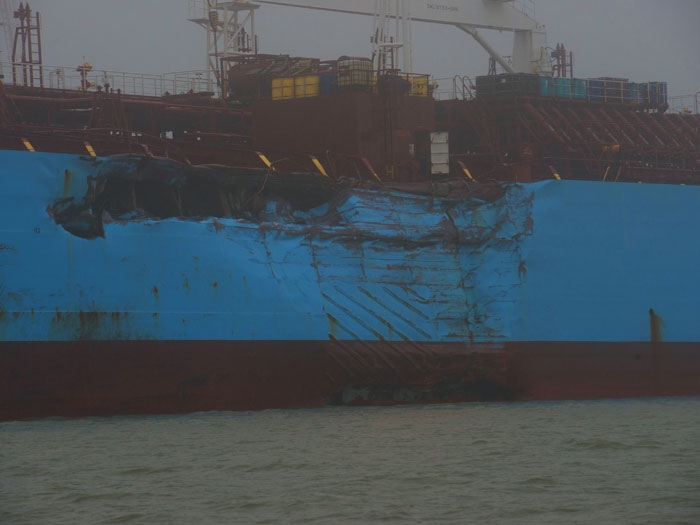 The chemical tanker Carla Maersk sits at anchor off Morgans Point, Texas, after being involved in a collision with the bulk carrier Conti Peridot March 9, 2015. The Carla Maersk was carrying about 216,000 barrels of Methyl Tertiary Butyl Ether and an unknown quantity of the product was spilled

The Carla Maersk incurred significant damage following a collision earlier in the week between it the and the Conti Peridot (see earlier story).

Responders finished removing the liquid cargo from the ship’s two breached tanks early Thursday morning. The partial removal of cargo, Methyl Tertiary Butyl Ether (MBTE), was a necessary step before the ship could be moved to a safe harbor. Plans also included checking the structural integrity of the vessel before moving it to another location.

High-density foam was used to suppress flammable vapors from the damaged tanks on the Carla Maersk. Extensive air monitoring around the ship showed no sign of vapors seeping from the vessel.

Responders continue to conduct air and water tests, which show no public health or environmental concerns.

The Conti Peridot was moved Tuesday to the Port Authority’s Turning Basin terminal.

The cause of the collision remains under investigation.