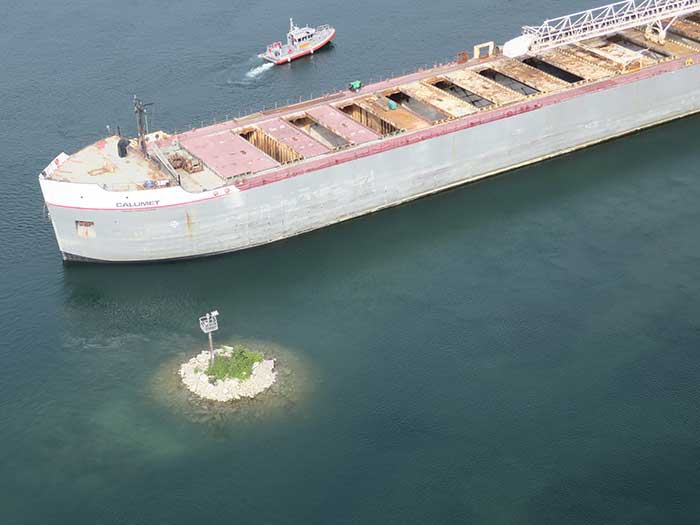 Self-unloader had been hard aground, but was refloated by deballasting

AUGUST 14, 2017 — U.S. Coast Guard 9th District, Great Lakes, reports that the 629 ft self-unloading bulker Calumet, a 629-foot ship that ran aground on the north side of Sugar Island in the St. Mary’s River,Wednesday, was re-floated Friday, at approximately 8:50 PM, after the Coast Guard approved a salvage plan submitted by the vessel’s owner, Rand Logistics subsidiary Grand River Navigation.

The St. Marys River, which had been closed to commercial vessel traffic from the Soo Locks to Six Mile Point following the grounding, was reopened at 9:30 p.m. Friday after the Army Corp of Engineers surveyed the bottom of the river in the vicinity of the grounding and found that no debris was obstructing the channel.

After the Calumet was refloated by offloading ballast water, it then sailed under its own power to anchorage near Lake Nickolet where it underwent an exterior and interior examination. No warping, indentations, or other damage to the hull was found.

There were no injuries during the incident or salvage operations. Coast Guard Station Sault Ste. Marie conducted a sunrise search this morning for any signs of pollution; no impact to the environment was found.