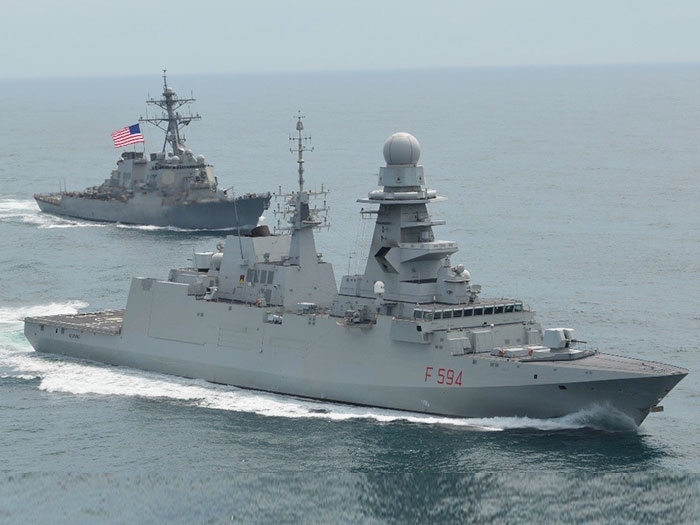 MAY 22, 2018 — The ITS Alpino, a Fincantieri-built Italian Navy FREMM class frigate recently arrived in Norfolk, VA. The FREMM design is one of five being considered by the U.S. Navy for its FFG (X) future frigate program (see earlier story).

According to Fincantieri, the FREMM frigates are the only ships in the competition that have been proven in combat, having helped to destroy a Syrian chemical weapons facility in April.

“The ITS Alpino demonstrates the proven versatility and capability of the FREMM class frigate,” said Vice Admiral Richard Hunt (Ret.), Fincantieri Marinette Marine’s Chief Strategy Officer. “It is lethal, survivable, designed for sailors and in service now. It provides a superior platform for the U.S. Navy FFG(X) competition and can provide great combat capability for our Navy in the near term and beyond. It will contribute to the defense of America and our allies.”

“ITS Alpino‘s visit to the United States provides a great opportunity to introduce this ship to Navy leadership and warfighters.” Admiral Hunt added. “The design has demonstrated its flexibility with several variations used in the Italian and French Navies and has the ability to grow to serve the U.S. Navy’s future needs. It is a highly capable, proven warship which has been consistently built on schedule and at an affordable cost. FREMM class ships are built with industry best practices in design and construction, delivering superior performance quickly and affordably with a strong focus on providing a high operational availability.”

“The ITS Alpino‘s cutting-edge technology provides the capabilities needed for FFG(X) to be highly lethal while still being dependable and comfortable for the sailors who operate it,” said Charles Goddard, formerly the U.S. Navy’s PEO Ships and currently Fincantieri Marine Group’s Senior Vice President. “The FREMM’s design will enable it to grow over its service life with the U.S. Navy with limited upgrade costs. This ship is a technical marvel.”

Among many other capabilities, the ITS Alpino has 16 Vertical Launch System (VLS) cells that can be readily upgraded to 32, can host two helicopters, and can combat undersea, surface, and airborne threats.

Following its stay in Norfolk, the ITS Alpino will visit Baltimore, New York City, and Boston. The trip is designed to both improve upon cooperation between the U.S. and Italian navies and underscore the potential benefits of frigates based on the FREMM design for the U.S. Navy.