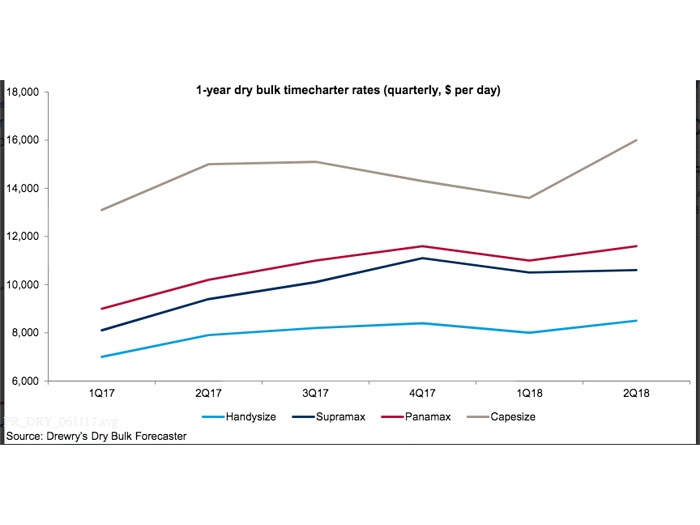 NOVEMBER 6, 2017—Global shipping consultancy Drewry expects dry bulk shipping charter rates to recover from the second quarter of 2018 on the back of strengthening Asian iron ore demand, according to its latest edition of the Dry Bulk Forecaster.

For the medium and long term, Drewry holds the same views as in previous forecasts. Chinese steel production is expected to pick up pace at the end of winter, in the second quarter of next year, by which time production curbs will have relaxed. Strong infrastructure and construction activities will further strengthen steel consumption. Meanwhile, the Chinese government is closing down inefficient and highly polluting mills; this will pave the way for efficient millers to produce high quantity steel, strengthening demand for high-grade imported ore. Growing grain consumption in African and Asian countries will support grain trade.

China driven Belt and Road initiative (BRI), previously known as One Belt One Road, will also drive dry bulk shipping in the long run. The Chinese government is planning to invest heavily in infrastructure development to revive the 16th century silk-route from China through Central Asia and the Middle East to Europe, extending to the maritime route linking China to Southeast Asia and East Africa by sea. The BRI would involve building new ports, roads, railways, power plants and pipelines. This highly ambitious project will create strong tailwinds for dry bulk shipping, taking into account the massive planned infrastructure development undertaken by the Chinese government, which can entail an expenditure of up to $8 trillion by 2020.

On the supply side, the dry bulk fleet will grow at a moderate pace in the coming years. Improving charter rates are reviving the interest of shipowners in the newbuild market; however fleet growth will remain in check because of the thin orderbook and IMO regulations (low deliveries in the short-term and high demolition activity in the long-term). Hence, a big chunk of the orderbook will be replacement tonnage.

Nonetheless, there is a downside for the short term. To tackle pollution caused by high coal consumption in the winter months, the Chinese government is planning to cut down steel production between November 2017 and March 2018. This will directly impact demand for iron ore in the short term. As per the proposed policy, the government might impose a 50% cut on existing steel production of 40 million tonnes, but this goal looks highly ambitious.

“We believe a 25% cut is more achievable, in which case there would be a reduction of 20 million tonnes of steel production, which as a result, would reduce demand for iron ore. Even though iron ore demand will remain strong in other Asian countries, such as South Korea and Taiwan, we do not expect this demand to be strong enough to offset the impact of reduced demand from China,” commented Rahul Sharan, Drewry’s lead analyst for dry bulk shipping.

“In brief, the next few months notwithstanding, a bright future is expected for the dry bulk charter market, providing solace to shipowners and shipyards alike,” added Sharan.