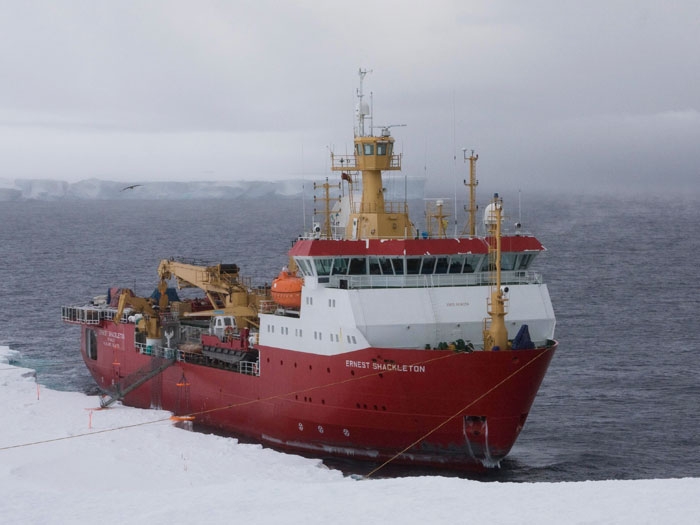 APRIL 13, 2016 — Crystal Cruises has named the icebreaker that will accompany the 1,070 passenger Crystal Serenity embarks in August on what will be the first venture by a large cruise ship through the Northwest Passage (see earlier story).

The cruise line has signed a charter party agreement with Tactical Marine Solutions of Victoria, BC, Canada and British Antarctic Survey (BAS), Cambridge, U.K. that will see the RRS Ernest Shackleton escort Crystal Serenity on its 32-day expedition voyage.

The RRS Ernest Shackleton, operated by BAS, is an ICE 05 classed icebreaker that will provide operational support to Crystal Serenity, including icebreaking assistance should the need arise , and carry additional safety and adventure equipment.

“We have been planning this historic sailing for more than two years, working closely with expedition experts from EYOS-Expeditions, as well as Transport Canada, the US and Canadian Coast Guards and local agencies along the route to ensure the ultimate safety and a most memorable experience for our guests,” says Crystal president and CEO, Edie Rodriguez. “The RRS Ernest Shackleton’s assistance in navigating this region will only enhance the safety of our voyage.”

Crystal Cruises says the expedition crew is made up of expert guides with many years’ experience transiting the Northwest Passage and also a diver and support team trained in the use of the emergency equipment carried on board. The RRS Ernest Shackleton will support Crystal’s adventures ashore, carrying newly acquired zodiacs for “wet landings,” while the vessel’s crew will provide expert assistance during flightseeing adventures and the line’s recently unveiled “Unexpected Adventures,” which offer more spontaneous ways of exploring the region.

Prior to making the voyage Crystal Serenity will be outfitted with state of the art forward looking sonar, ice detection radar, ice searchlights and thermal imaging, as well as an ice navigation system that will display near real time satellite ice imagery and ice forecasts. In addition, the Master and bridge team will attend ice navigation training at a simulator in St John’s, Newfoundland, and two veteran Canadian ice pilots will be on board to assist the bridge team in managing the information provided by additional equipment which is not typically found on cruise ships.

The RRS Ernest Shackleton will also carry her own very experienced ice pilot.

Launched in 1995, RRS Ernest Shackleton  is primarily a logistics vessel used to transport cargo, fuel and passengers. The ship also has a basic scientific capability and undertakes some research work. During the northern summer, the vessel is commercially chartered to third parties. Built by Kvaerner Kleven Leirvik shyard of Norway as the MV Polar Queen for owners GC Rieber Shipping of Bergen, she was deployed in the Antarctic by other national program before commencing a long-term charter to BAS in August 1999.