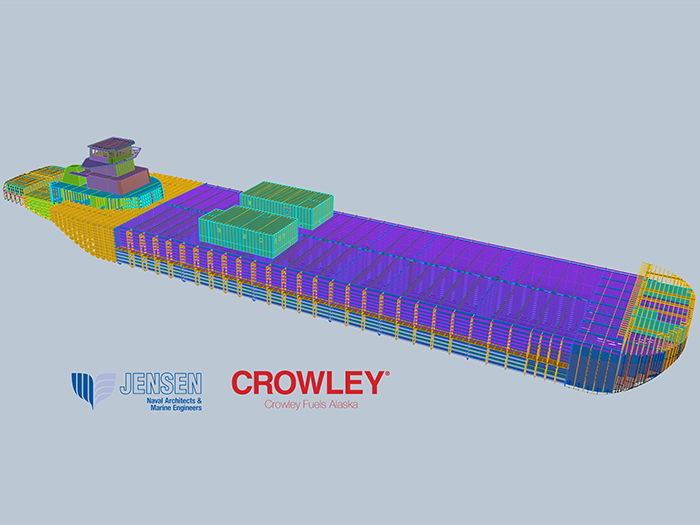 Crowley Fuels has signed construction contracts to build a 55,000-barrel, articulated tug-barge (ATB) that is specifically designed to serve the Western Alaska market with delivery of clean fuel products.

The 410-foot ATB will have enhanced performance features for the demanding river and sea conditions of Western Alaska, an area that depends on safe and reliable marine delivery services during the short open-water season.

The tug will be constructed by Master Boat Builders of Bayou La Batre, Ala. The 350-foot barge will be built by Gunderson Marine LLC, a wholly owned subsidiary of the Greenbrier Companies, Inc., in Portland, Ore. The ATB is expected to be delivered in January 2021.

Crowley’s project management group will provide plan review, on-site construction management in the shipyards, and will work with Crowley Fuels to transition the vessel into service.

“Our new ATB will continue Crowley Fuels’ long-standing commitment to provide Alaska with safe and dependable marine transportation to serve the energy needs of the state,” said Rick Meidel, vice president and general manager, Crowley Fuels. “We look forward to working with Gunderson Marine and Master Boat Builders to build both a high-performing and efficient vessel to serve the state and enhance our overall operations. The vessel’s capabilities will be able to meet the particular needs of Western Alaska, which depends on maneuverable and functional vessels for reliable supply of the communities’ fuel needs.”

Additionally, the ATB will feature the capability to perform nearshore ship-to-ship cargo transfers.

The barge will be fitted with an azimuthing pump jet bow thruster to provide enhanced maneuverability and station keeping capability. In addition, the tug will be equipped with two GE 6L250 main engines that meet U.S. Environmental Protection Agency’s Tier IV environmental standards. The tug has azimuthing stern drives to enhance maneuverability, and an Intercon C-series coupler system.

To provide off-ship firefighting capabilities to the barge, the tug is equipped with a fire monitor and foam proportioner. In addition, the ATB will include a full complement of spill response gear, including 2,000 feet of boom and a work skiff to meet State of Alaska requirements.

“Gunderson Marine has a deep-rooted history serving Crowley,” said William A. Furman, Greenbrier Chairman and CEO. “We are pleased to continue this legacy with one of the world’s premier marine solutions companies and one of our largest and most prominent customers. This is an exciting opportunity, and we look forward to collaborating during the construction of this vessel.”

“We are thrilled about the opportunity to work with Crowley on this project,” said Garrett Rice, chief financial officer, Master Boat Builders. “We know the importance of this vessel to the remote areas of Alaska and are excited to collaborate with a yard with such a good reputation and history as Gunderson Marine to give Crowley Fuels a quality vessel to meet the needs of Western Alaska.”

Crowley operates and manages the largest U.S.-flag petroleum and chemical tank vessel fleet in the U.S., including 40 Jones Act-qualified, large petroleum transportation vessels with a combined capacity of more than 12 million barrels. Its ATBs, tankers and other vessels regularly serve Alaska, including barge fuel delivery.

This new ATB will follow the completion of Crowley’s 100,000-barrel ATB now finishing construction at Bollinger Shipyards for service under charter in Alaska to Petro Star Inc., a wholly-owned subsidiary of Arctic Slope Regional Corporation (ASRC). The barge will be named Oliver Leavitt, in honor of ASRC’s former chairman and current member of the corporation’s board of directors, and the tug will be named Aveogan, Leavitt’s Iñupiat name.

Construction on the barge will begin in the first quarter of calendar 2020, and delivery is expected by January 2021. Barge construction will occur at Gunderson Marine, located along the Willamette River in Portland, Oregon. The barge will be dual-certified to comply with both U.S. EPA Tier III and IMO Tier III air-quality emission standards.

This is the tenth barge Gunderson Marine has built for Crowley since 1985, when Greenbrier acquired Gunderson.

Operating from the largest side-launch shipyard on the West Coast, Gunderson Marine is the only West Coast shipyard that has built large, articulated tug barges, while also leading the industry in the number of ATBs built over the past five years. In addition to tank barges, the facility has also successfully completed deck barges, dump scows, oil spill recovery vessels, crane barges and hopper barges.