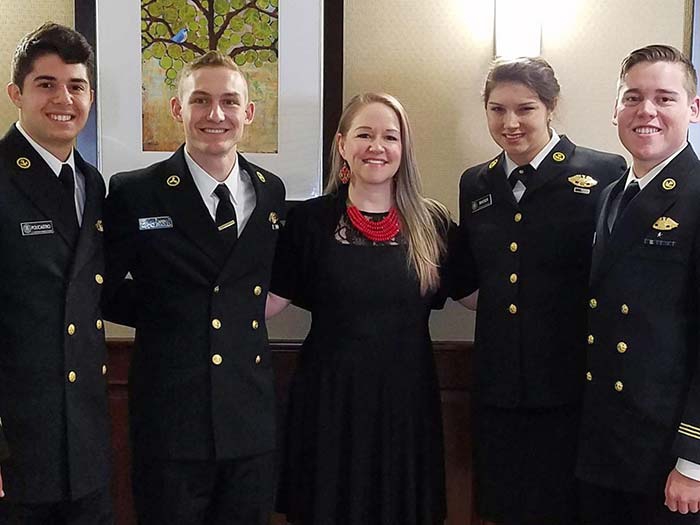 Crowley’s Jenny Terpenning, supervisor, marine recruiting, presented the scholarships to midshipmen Joshua Cann, Vincent Policastro, Rebecca Snyder and Benjamin Starr while also formally recognizing 2016 recipient Chandler Chiappe, all of whom were chosen based on their academic performance, financial need and interest in pursuing a career at sea after graduation.

Recipient Joshua Cann is a first-class midshipman ensign studying marine engineering and shipyard management. During his time at USMMA, he has spent a year at sea on both a commercial containership and a U.S. Navy Expeditionary Fast Transport Vessel and has spent three months interning at Detyens Shipyard. Cann has consecutively made the Dean’s list while being an active tutor, and is pursuing the position of Regimental Academic Officer.

Aside from his academic achievements, Cann runs marathons with the Kings Point Endurance Club, of which he is the Operations Officer. On graduation, he plans to pursue a master’s degree in naval architecture and marine engineering.

Vincent Policastro, is a second-class midshipman majoring in maritime logistics and security. He is involved in the O’Gara Academic Honor Society, Acta Non Verba Club, and is currently training to be a Company Academic Officer. He is involved in rigorous academic courses, for which he maintains a 3.9 GPA. He has spent over 300 days at sea as a deck cadet including stints for Military Sealift Command (MSC), during which time he earned his Person in Charge endorsement; Tote Services; and most recently Crowley, aboard the company-managed Horizon Reliance and Horizon Pacific.

Policastro plans to sail as a third officer on a commercial vessel upon graduation.

Rebecca Snyder, is a first-class midshipman originally from Jacksonville, FL. She has sailed around the world as a cadet on both commercial and military (MSC) ships. She played an integral part in training the freshman Class of 2021 as the Company Executive Officer. Her primary goal after graduation is to sail commercially as a third mate in the Merchant Marine.

Midshipman Benjamin Starr will graduate in 2019 with a degree in maritime logistics and security. During his freshman year, Starr became involved with the USMMA Emergency Services Rescue Squad after receiving his New York State EMT-B license. He was also vice chairman of the USMMA Campus Activities Board and worked directly with the Commandant’s Office to help establish the first student café on campus. For his sea time, Starr served aboard MSC’s USNS Walter S. Diehl and is currently serving as a deck cadet aboard the Matson-owned MV Manulani. Upon graduation, he plans to sail commercially as a third mate and is seeking a commission in the U.S. Navy Reserve as a Strategic Sealift Officer.

2016 scholarship recipient Chiappe is a midshipman first class studying marine transportation. He is a snare drummer in the Band Company and wrote and organized the program, drill, visual effects, and drum feature for the Regimental Band’s Beat Retreat Ceremony. He completed a two-week internship with U.S. Navy Training Squadron VT-21, totaling more than 20 hours of flight time. He has sailed on two commercial containerships, Maersk Kensington and APL Singapore, the aircraft carrier USS Nimitz and the fleet ocean tug USNS Sioux. Upon graduation, Chiappe hopes to serve as a Navy pilot before joining a commercial maritime fleet.

Since 1984, Crowley has provided more than $3 million dollars in scholarship funding for more than 1,000 students. The company has also donated more than $2 million over the years to support other educational programs. In 1994, Chairman and CEO Tom Crowley Jr., established the Thomas B. Crowley Sr. Memorial Scholarship Program in honor of his father who led the company to extraordinary heights before passing away in 1994. The company continues to give scholarship dollars to deserving students in the U.S., Alaska and Puerto Rico. In 2006, the program was expanded to Central America and to date, has provided financial assistance to 20 students in that region.