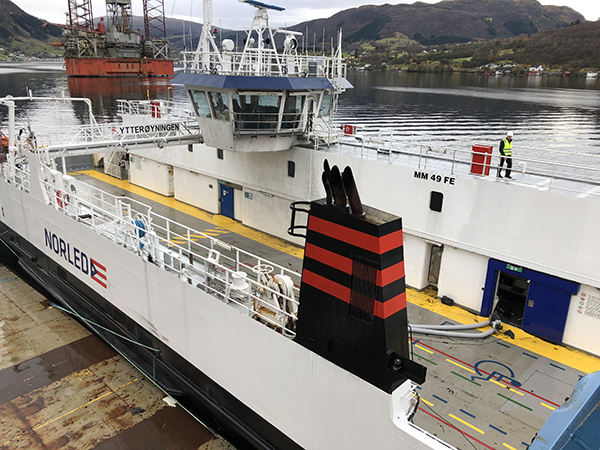 Norled ferry Ytterøyningen, built in 2006 and converted to battery-hybrid in 2019, was in regular operation, running on its diesel engines when the fire started (PHOTO: Dag Inge Aarhus, Sjøfartsdirektoratet)

Battery manufacturer Corvus has now issued its preliminary findings on the cause of a fire that broke out in the battery room of a Norwegian hybrid ferry on the evening of Thursday, October 10.

The Norwegian Maritime Authority (Sjøfartsdirektoratet) says it supports Corvus’s findings but would like to consider the report from Norwegian National Criminal Investigation Service (KRIPOS) before drawing its conclusion.

The Norled ferry Ytterøyningen, built in 2006 and converted to battery-hybrid in 2019, was in regular operation, running on its diesel engines when the fire started. There were twelve passengers and three crew members aboard the vessel at the time. Firefighting commenced and the ferry reached port under her own engine power. Passengers and crew were evacuated to shore.

Next morning, however, there was an explosion below deck, in or adjacent to the battery room.

The investigation and findings so far show that the fire was most likely due to a coolant leak from a gasket in the Corvus liquid-cooled energy storage system and that it was a one-off event, says Geir Bjørkeli CEO of Corvus Energy.

“For Corvus it is important to release the preliminary conclusions on the cause of the fire on board Ytterøyningen, thus avoiding speculation and uncertainty regarding the safety of lithium-ion battery-based energy storage systems. Safety has been, is and will always be Corvus Energy’s first priority,” says Bjørkeli.

It is too early to conclude whether the twisted gasket was a result of recent service work on the cooling system or if it was caused by other reasons.

The leakage created arcing between electrical components, at pack voltages of 1,000 V DC, igniting a fire. The fire was fueled by ethylene glycol components from the coolant and caused external heating of battery modules.

Findings have shown that the patented and certified Corvus Passive Single Cell Thermal Runaway Isolation safety system worked as designed and intended, most likely limiting the damage from the fire.

The further investigation will focus on how the extent and severity of the following events were able to develop towards an explosion 12 hours later in the switchboard room adjacent to the battery room.

The Norwegian Maritime Authority says that, judging from the preliminary investigation, the escalation of the incident is likely connected to the use of the seawater sprinkler system for a short period of time, which among other things, caused several short circuits.

“We still feel confident that the batteries do not pose a greater risk than more conventional energy sources on ferries,” says NMA Acting Director General of Shipping and Navigation, Lars Alvestad. “However, such an incident demonstrates the importance of continuously working on making improvements with regards to routines and safety measures. Therefore, the findings from Corvus and the report from Norwegian National Criminal Investigation Service (Kripos), as well as our own participation in the investigations, will be important contributions to the continued work on the phasing in of new technology.”