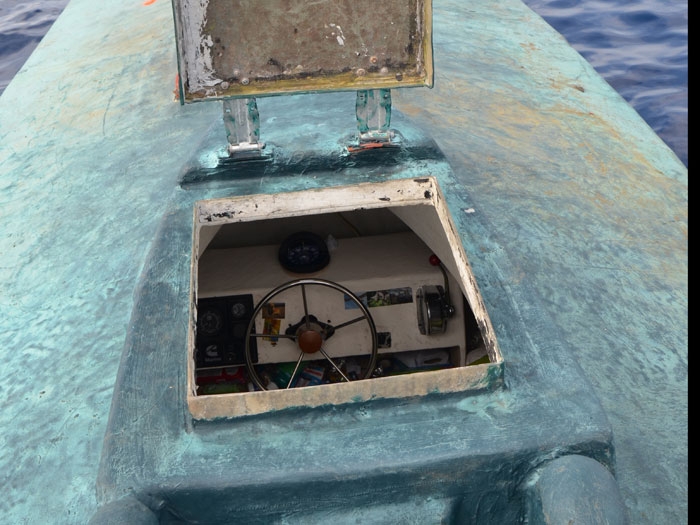 Around 15,000 pounds of cocaine were seized and four suspects aboard the self-propelled semi-submersible vessel were detained.

The incident took place in international waters of the Eastern Pacific Ocean off the coast of Mexico. A CBP Office of Air and Marine P-3 Maritime Patrol Aircraft tracked the 50-foot vessel while on routine patrol in the region. The Coast Guard Cutter Bertholf, also on patrol in the area, was alerted to the suspicious vessel.

The cutter launched two Over-the-Horizon Long-Range Interceptor boat crews to intercept and board the vessel. Upon approach of the boarding teams, four suspected smugglers exited the hull. Boarding team members retrieved bales and loose bricks of contraband from the semi-submersible that tested positive for cocaine.

"Every load of cocaine stopped at sea impacts the operation of transnational criminal organizations that spread violence, instability and death wherever they operate," said Lt. Cmdr. Joseph Giammanco of the 11th Coast Guard District law enforcement branch. "It takes a dedicated, well-coordinated team to accomplish this dangerous and important mission. We're proud of our crews and thankful for our strong partnership with Customs and Border Protection."

The seized contraband is worth an estimated $227 million.

After the suspected smugglers and contraband were removed from the semi-submersible the craft was sunk as a hazard to navigation.

The previous month, on July 18, the crew of the Coast Guard Cutter Stratton from Alameda, CA, apprehended four suspected smugglers and seized 275 bales of cocaine worth more than $181 million wholesale from a self-propelled semi-submersible. In this incident, the 40 ft craft had been detected by U.S. Navy maritime patrol aircraft detected the 40-foot semi-submersible vessel more than 200-miles south of Mexico.

After removing 12,000 pounds of the narcotics aboard, the crew of Stratton attempted to tow the vessel to shore as evidence; however, the semi-submersible began taking on water and sank. Approximately 2,000 pounds of cocaine that had been left in the narco sub to stabilize it during the towing evolution sank in over 13,000-feet of water and is unrecoverable.

There have been more than 25 semi-submersible interdictions in the Eastern Pacific Ocean since November 2006 when the first documented interdiction occurred.

The vessels are extremely difficult to detect and interdict because of their low-profile and ability to scuttle.

SEPTEMBER 25, 2015 — The U.S. Coast Guard has released photographs of a “narco sub” interdicted in a joint operation with U.S. Customs and Border Protection, August 31. It is the latest in a series of such seizures.