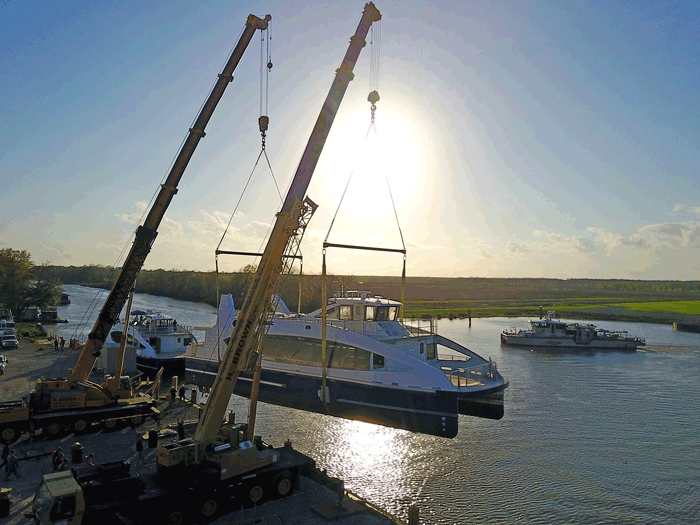 At 7:30 AM on Friday February 24th, operators from Berard Transportation began the elaborate process of moving the first of two 86 ft x 26 ft  catamaran-hulled aluminum passenger vessels from Metal Shark’s final assembly building to the waiting cranes from H. Brown Crane Service, which hoisted the vessel and placed it into the adjacent Charenton Canal. By 3:30 PM, both vessels were in-water with Metal Shark crews resuming work on vessel fitout. Meanwhile, two more Citywide Ferries were being prepared for paint, and two others were taking shape in the welding shop, as work on the project continues.

“Today with the launch of these first two vessels we reached an important milestone on the Citywide Ferry project, which we commenced in July,” explained Metal Shark CEO Chris Allard. “We’re on a rigorous schedule to get these boats completed and delivered on time. Fortunately we had planned the bulk of the logistics prior to the award of the contract, and we’re happy to say we’re right on schedule.”

Metal Shark plans to deliver two of the New York ferries per month from March through May.

“It is a massive undertaking and Metal Shark has and continues to showcase their experience and expertise in the craft of vessel construction,” noted Junior Volpe, Director of Special Projects for Hornblower. “The vessels constructed will become part of an impressive fleet operating on the East River in New York this coming summer.”

Meanwhile, site preparation was taking place at the yard as Metal Shark expands its operations to accommodate increased activity. The foundation for a new 200 ft  x 80 ft fully enclosed large vessel assembly building will be poured within the next few weeks, along with a stand-alone, two-story office building with over 8,000 square feet of space for Franklin’s engineering, program management, and administrative staff.

With Citywide Ferry construction now well underway and portion of an 18-boat foreign military patrol boat order recently completed, Metal Shark is preparing to commence work on a four-boat order of 88 ft passenger vessels for the Potomac Riverboat Company division of Entertainment Cruises, and a two-boat order of 105 ft passenger vessels for the New Orleans Regional Transit Authority (RTA). Beyond the passenger vessel market, the Franklin yard will be producing a range of orders including additional 45 ft patrol boats, a 45 ft pilot boat, a multi-boat U.S. Navy contract for 50 ft high-speed vessels, a 70 ft supply boat, and a 158 ft catamaran.