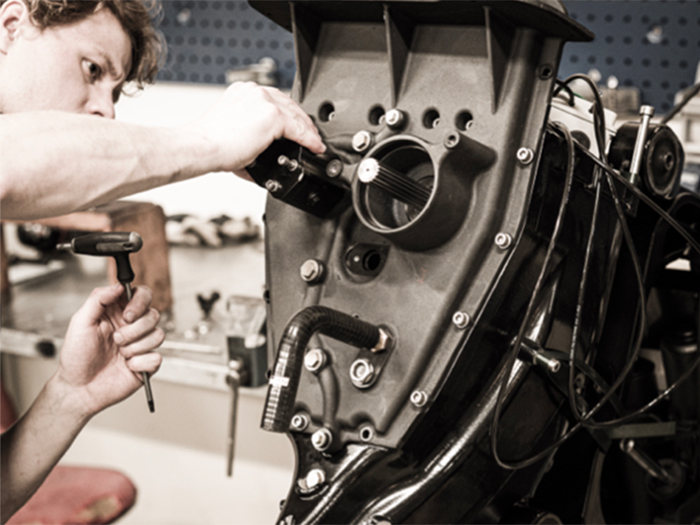 The world’s first diesel outboard to target the high power segment, the OXE Diesel has a unique belt driven propulsion system that allows a hydraulic multi-friction gearbox to be mounted. This enables the engine to handle significantly higher loads than a traditional outboard. The OXE Diesel outboard has a horizontally mounted engine as opposed to a traditional outboard with a vertically mounted engine.

Currently OXE Diesel models cover the 125 hp to 200 hp power ranges and recent sales successes include the sale of nine 150 hp engines to Scotland’s Flugga Boats, which builds rugged RIBs designed to stand up to the harsh sea conditions around the Shetland Islands.

BASED ON A BMW DIESEL

Now Cimco is developing a new generation OXE based on a six cylinder, twin turbo, 3-liter diesel from BMW. Internally, Cimco calls this the Bison project. The next generation prototypes are currently being built and are scheduled to hit the water in early July. Start of production is scheduled for spring 2020.

“With our motivated and dedicated design and verification teams, we are confident to deliver the OXE 300 on time to the market.” says Per Wigren, Project Manager at Cimco Marine AB.

Development has now reached the second prototype phase. In the first set of seagoing prototypes the complete outboard engine has been successfully tested, both in test cells, test tank and on water.

Tests performed up to this point indicate that the OXE Diesel 300 is expected to consume about 40% less fuel than a 300 hp gasoline outboard. The tests also indicate that CO2 will be reduced by more than 35%, CO by more than 99% and HC + NOx by more than 70% when comparing to gasoline fueled outboard standards.