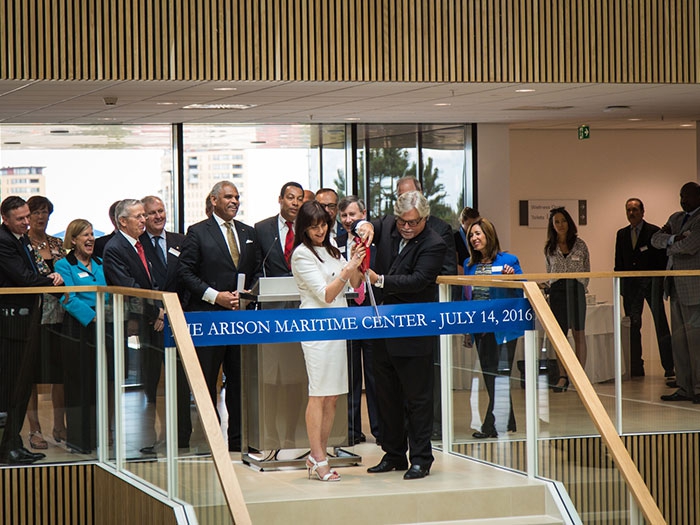 JULY 15, 2016 — Carnival Corporation & plc (NYSE/LSE: CCL; NYSE: CUK) reports the official opening of the Arison Maritime Center, a EUR 75 million facility just outside Amsterdam dedicated to providing rigorous safety training for the bridge and engineering officers responsible for the navigation and operation of the world’s largest fleet of cruise ships.

Carnival Corporation & plc Chairman Micky Arison, along with his wife Madeleine, officially opened the center with a grand opening and ribbon-cutting ceremony attended by top executives and local and national government and business leaders.

The centerpiece of the seven-acre campus is a new and more than two-times-larger Center for Simulator Maritime Training Academy (CSMART), featuring bridge and engine room simulators that utilize innovative technology and training solutions  modeled closely after the technology and practices used in the airline and other industries.

“The opening of the new Arison Maritime Center and expansion of our CSMART Academy is a major milestone in our company’s history and an exciting day for all of us at Carnival Corporation,” said David Christie, senior vice president of maritime quality assurance for Carnival Corporation. “The safety and comfort of our guests and crew is our most important priority, and the Arison Maritime Center underscores the depth of our commitment to making sure our ships sail as safely as possible. Our bridge and engineering officers are the heart and soul of our ship operations, and this center takes to a new level our dedication to providing our officers with the maritime industry’s most comprehensive and progressive safety training.”

At 110,000 square feet, the new facility allows Carnival Corporation to provide annual training to over 6,500 officers and engineers across the company’s 10 cruise line brands.It will also include an advanced medical center and an 11-story, 176-room hotel for Carnival Corporation trainees.

The CSMART Academy has played a leading role in developing and refining a function- and team-based bridge and engine room management system on a large scale. The approach is based on roles rather than ranks, with officers operating as a coordinated team, with each officer assigned a role for specific functions. It also includes encouraging team members of all ranks and seniority to speak up to challenge or question a decision.

His late father, Ted Arison, founded the company in 1972 with one ship with the firm belief that cruising is one of the best ways to enjoy a vacation and a commitment to making cruising available to people from all walks of life. Referred to by The New York Times as “the godfather of the modern cruise industry,” he is credited with building cruise operations that give travelers the opportunity to enjoy a cruise vacation with prices that range from affordable to upscale.

Today, the company has 101 cruise ships, over 120,000 employees and welcomes 11 million guests annually