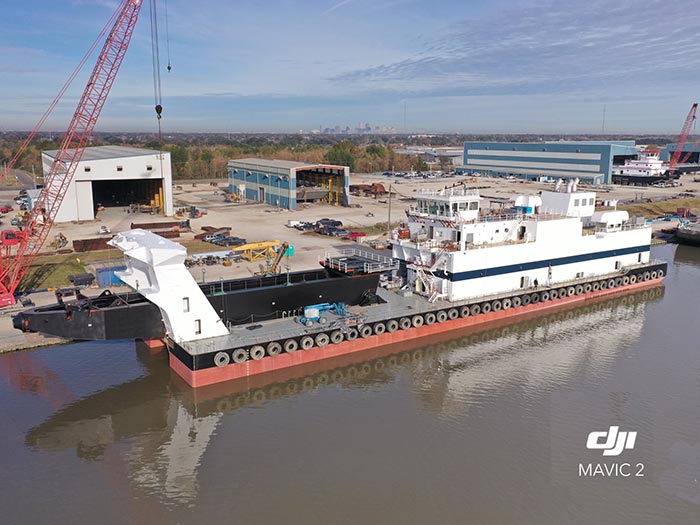 Galveston, Texas, based dredging contractor Callan Marine recently launched the General MacArthur, one of the largest cutter suction dredges in the U.S. market, at the C&C Shipyard in Belle Chasse, La.

At 290 feet in length and a 9 foot draft, the General MacArthur has a 24,000 total installed horsepower. Powered by three Cat-MAK diesel engines, the dredge has a fuel capacity of over 300,000 gallons, giving it the capability to work on all U.S. coasts and waterways, as well as globally.

The 32” cutter dredge General MacArthur is designed to perform capital, maintenance and beneficial use dredging (such as marsh creation and beach renourishment.) It has a dredging depth range of 90 feet, with an 800 mm suction and discharge pipeline diameter.

In addition to powerful mechanical specifications, the General MacArthur is built with crew accommodations that include a full galley, gym, TV/rec room, laundry facility, conference room, engineer’s office, and captain/chief engineer staterooms in addition to 33 beds (all staterooms have private bathrooms).

“The General MacArthur is a true game changer for the dredging industry,” says Maxie McGuire, President of Callan Marine. “With its combined scope, power and accommodations, we will see project speed and quality increase at unprecedented rates.”

The 32” General MacArthur is anticipated to start work in early 2020, joining the ranks of Callan Marine’s other dredges: the 18” General Pershing, the 16” General Patton, and the 12” General Eisenhower.