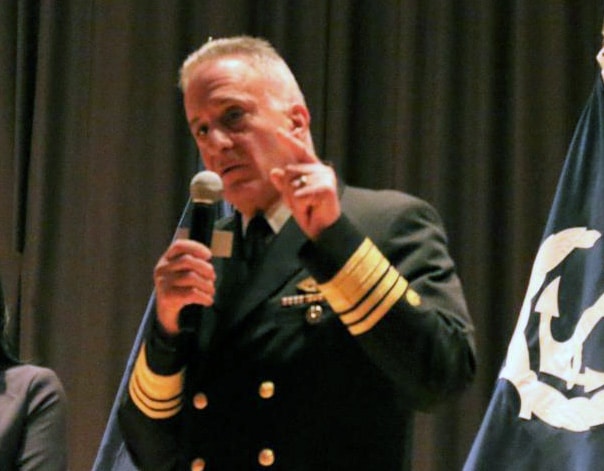 Buono arrived at the USMMA in November 2018, after retiring as the president and CEO of SeaRiver Maritime Inc., an ExxonMobil marine subsidiary headquartered in Houston, Texas.

A 1978 Kings Point graduate, Buono has spent the past three and a half years leading the academy and facing some tough challenges. These have included guiding the institution through the COVID-19 pandemic. He succeeded in graduating two classes during the height of the crisis—on time, and COVID-free—with the expectation he will do the same with a third graduating class this year.

Perhaps an even tougher challenge though has been the fall-out from the harrowing narrative told by the female USMMA cadet now known as “Midshipman X.”

In response to those disclosures, the chairs of the six key congressional committees with oversight of the USMMA wrote Secretary of Transportation Pete Buttigieg demanding action. They wrote that the incident “sheds light on the toxic culture not only at USMMA, but within the maritime industry where cadets and mariners are in danger and have no escape from their perpetrators.”

As well as demanding changes in the academy’s Sea Year program, the legislators said they believed “there needs to be a change in the leadership of the USMMA,” writing that Buono “has failed to take seriously the safety of his students and has not demonstrated a commitment to change the toxic culture at the academy and during Sea Year.” They called for him be removed from his position.

That did not happen and the academy’s official announcement of Buono’s retirement notes that he will relinquish command at a ceremony in June 2022, on a date to be determined later. His successor has not been announced.

“I’d like to thank all those involved in the day-to-day operations at the academy,” said Buono in announcing his retirement. “From the staff, faculty and coaches, to the alumni and the parents, to the support staff members that keep the lights on and the water running, I want each of you to know how proud and thankful I am to have served as the leader of this great institution.”