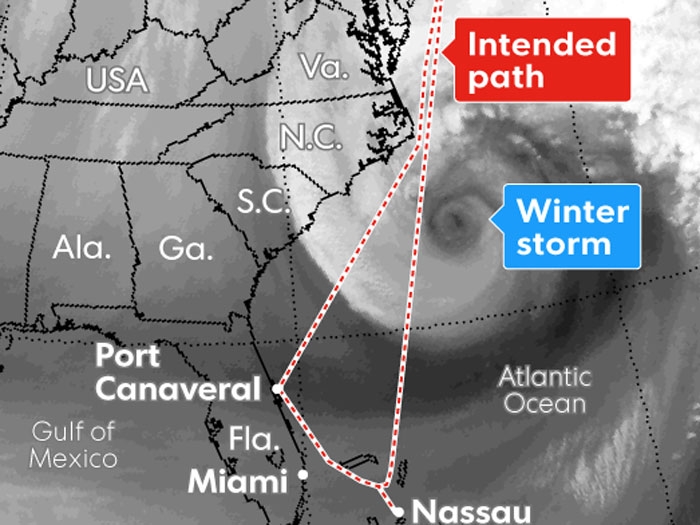 FEBRUARY 25, 2016 — A passenger aboard the Anthem of the Seas cruise that hit the headlines when the ship was battered by heavy weather earlier this month, today filed suit against Royal Caribbean Cruise Line.

The suit was filed in U.S. District Court in Miami by attorney Michael A. Winkleman, of Lipcon, Margulies, Alsina & Winkleman PA, acting for New Jersey resident Frank DeLuca “on his own behalf and on behalf of all other similarly situated passengers aboard the Anthem of the Seas.”

It seeks class action status on behalf of all passengers and demands “judgment for all damages recoverable under the law against the Defendant, including punitive damages, and demands trial by jury.”

According to the complaint, the lawsuit “deals with defendant RCCL’s knowing and intentional decision to sail the Anthem of the Seas, carrying more than 4,000 paying passengers, directly into the path of a hurricane. More than 4,000 passengers were subjected to hours of sheer terror as the gigantic cruise ship was battered by hurricane force winds and more than 30 foot waves. This terror was amplified by the recent El Faro tragedy, wherein a cargo ship knowingly sailed into a hurricane and 33 crew members all perished. Just months after one of the worst maritime tragedies in recent history, defendant RCCL’s knowing, intentional and reckless conduct subjects RCCL to the imposition of punitive damages.”

“As the vessel was leaving Port,” says the filing, “Captain Claus Andersen informed the passengers that there was a weather system building along the east coast and he intended to outrun the growing storm. In other words, RCCL was knowingly sailing directly towards a quickly intensifying hurricane.”

The filing includes an said to show “the projected path and the gigantic storm that RCCL knowingly sailed through.”

“As predicted, by 3:40 p.m. on Sunday, February 7, 2016, the hurricane-force winds and rough seas were battering the vessel so severely that Captain ordered all passengers to be confined in their staterooms until further notice,” says the filing.

“While confined to their staterooms for approximately twelve hours, passengers were holding onto their beds and/or whatever they could find in order to keep from falling due to the severe crashing of waves and listing of the vessel. Furniture was overturned and tossed throughout the vessel; broken glass littered all levels of the vessel; a portion of the ceiling collapsed; elevators became inoperable; waves crashed through open and/or shattered balcony doors; and water rushed in through numerous other areas of the vessel.

“Waves were crashing over the top of the lifeboats tethered along the side of the Anthem of the Seas as the ship listed heavily to either side. At times the vessel listed (tilted) as far as 45 degrees and the passengers were violently thrown across their cabins.

“Passengers scrambled to search for life jackets or floatation devices but were unable to do so. There were numerous families with small children aboard the vessel and parents did their best to protect themselves and their young children who were crying uncontrollably and screaming in sheer terror …

“On Monday, February 8, 2016, RCCL decided to turn the Anthem of the Seas around and head back to New Jersey.

“Each and all of the foregoing conditions, including but not limited to, the impending dangerous weather and sea conditions, were known and/or should have been known to RCCL prior to the time RCCL decided to sail on February 6, 2016, with Frank DeLuca and all other passengers similarly situated. As such, RCCL knowingly, intentionally and recklessly decided to sail directly into the path of a hurricane force storm, thereby placing the lives at risk of each and every one of the passengers and crew aboard that ship.”

As of this evening, the filing had not shown up on the court’s electronic filing system, however a version is available on Lipcon, Margulies, Alsina & Winkleman PA’s website HERE

Media reports quote Royal Caribbean as saying it does not comment on pending litigation.