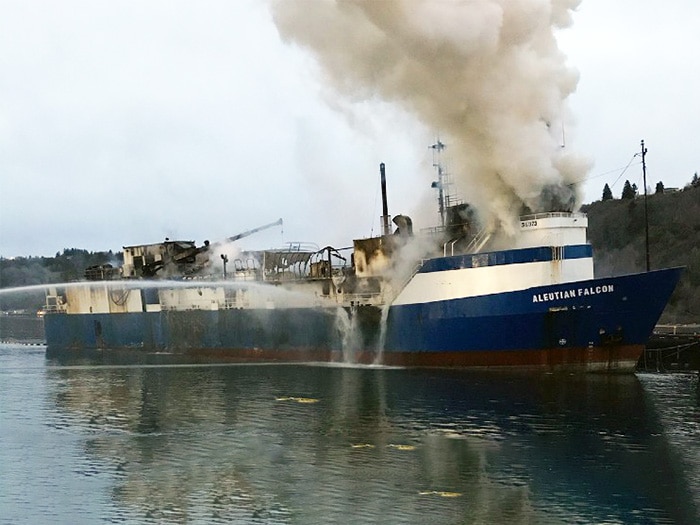 Issues related to hot work are the focus of the National Transportation Safety Board (NTSB) report on a February 2021 fire aboard a fish processing vessel docked for repair at a shipyard in Tacoma, Wash.

The fire aboard the vessel, the Aleutian Falcon, was reported February 17, 2021.The Tacoma Fire Department responded and extinguished the fire four days later. No one was on board the vessel at the time of the fire and no injuries were reported. An estimated 20-30 gallons of hydraulic oil leaked into the water but were captured by a containment boom. The vessel was declared a total loss with an estimated value of nearly $16.5 million.

The steel-hulled vessel was delivered as an offshore support vessel by Halter Marine of Chickasaw, Ala., in 1981. Originally named Petromar Falcon. it was renamed, lengthened, and converted to process fish in 1988 at Bender Shipbuilding and Repair Company, Mobile, Ala. In 2004, it was acquired by Trident Seafoods. Since 2017, the vessel had been used primarily to process salmon in Bristol Bay, Alaska, from May through August/September, after which it served as a bunkhouse (to house those who worked in the company processing plant) in Akutan, Alaska, in the Aleutian Islands.

The Aleutian Falcon had five decks: the pilot deck, with a pilothouse where the crew navigated the vessel; the bridge deck, which consisted of staterooms; the shelter deck, which contained staterooms and galley-related areas forward and crew accommodations aft; and the main and hold decks, which contained mainly fish processing rooms, a refrigerated cargo hold, various machinery spaces, storage rooms, offices, and workshops.

At the time the fire broke out, the Aleutian Falcon was docked for its maintenance and repair period in anticipation of the 2021 processing season.

“One of the worklist items scheduled to be conducted during the M&R period was to crop and renew a section of corroded steel bridge deck plating that measured 22 feet transversely and 20 inches longitudinally,” says the NTSB report. “The corroded section of plating ran beneath the aftmost transverse bulkhead on the port side of the house. The lower portion of this bulkhead, near where it met the deck, was also corroded and needed to be cropped and renewed. The steel would be cut out using oxy-acetylene cutting torches and electric grinders with cutting wheels. The job was considered ‘hot work,’ since these tools could produce sparks. After the corroded steel was removed, new steel plating would be fitted into the open area and the seams welded.

“Beneath the bridge deck plating being removed, within the shelter deck, was a pantry, a dry stores area, and the forward section of an enclosed freezer space (also called the ‘walk-in refrigerator’). At the forward end of the walk-in refrigerator and inboard was a longitudinal insert about 4 feet long (hereinafter referred to as a ‘wooden bulkhead’) that separated the refrigerator space from the pantry. This insert (which, according to the chief engineer, had been fitted sometime before 2012) was constructed of two-by-four wooden framing that had insulation between the wood and 0.5-inch plywood on either side, referred to as sandwich-style construction. Forward of the walk-in refrigerator was the dry stores area. Both areas contained rows of wooden shelving.”

Due to the location of the hot work, a marine chemist was brought on board to examine the areas involved. The marine chemist issued a marine chemist certificate that stipulated that work must be completed “without penetrating” the bridge deck, indicating he either was not aware or not clearly informed of the full scope of the planned hot work, or he wrote the stipulation in error. The marine chemist certificate required all foam insulation within 12 inches of the area of planned hot work to be removed. The workers told investigators that they removed the foam insulation in the area of hot work; ​h\however, they did not remove a foam-filled wooden bulkhead separating the walk-in refrigerator space, adjacent to the pantry, which was combustible.

​The NTSB says the fire most likely started near the wooden bulkhead, located directly below the area where hot work had been completed for the day. The hot work would have produced sparks and slag that likely traveled from the deck above (overhead) down to the wooden bulkhead, igniting the combustible materials in the area, as well as the bulkhead, and allowing for a smoldering fire to become established.

The National Transportation Safety Board determined that the probable cause of the fire aboard Aleutian Falcon was the company’s supervisory personnel inadequately planning for hot work, as well as shoreside workers’ inadequately protecting hot work areas, allowing slag from hot work to ignite combustible material near an insulated wooden bulkhead of a walk-in refrigerator that had not been removed or sufficiently protected. Contributing to the casualty was ineffective communication between the supervisory personnel, marine chemist, and workers.

It is critical for supervisory personnel to evaluate hot work areas for fire hazards to ensure that affected spaces are completely understood, prepared, and protected for planned hot work in accordance with regulatory guidelines, company policies, and marine chemist certificates, says the NTSB. Adherence to proper policies and procedures is vital to completing a safe hot work operation. Additionally, crewmembers and personnel involved in hot work should be able to identify hazards and take action to remove or mitigate potential risks to the vessel.