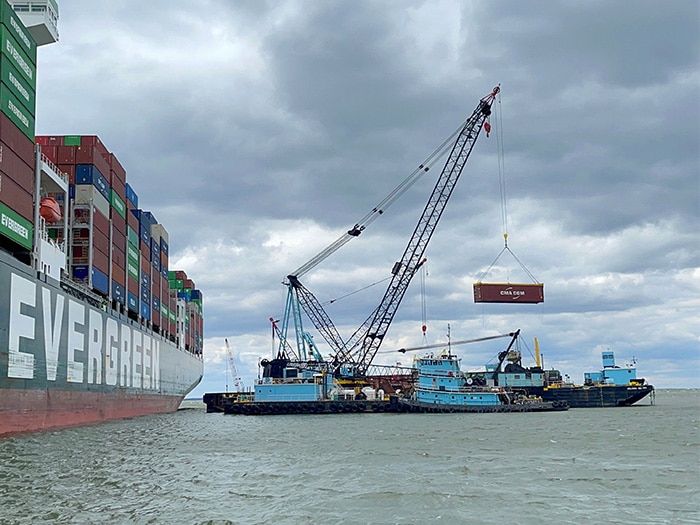 About 500 boxes will be taken off grounded containership Ever Forward. [USCG photograph]

Removal of cargo containers from the grounded containership Ever Forward got underway this past Saturday. The 1,095 feet long,12,118 TEU Evergreen Marine vessel has been bogged down in mud in Chesapeake Bay since March 13 and the boxes are being taken off in an attempt to lighten the vessel before a further attempt to refloat it is made. Three earlier attempts to refloat it using a combination of dredging and tugboat power failed.

According to the U.S. Coast Guard, container removal will continue, in daylight hours only, over the next several days before another attempt to free the vessel is made, using tugs and pull barges.

The boxes offloaded from the Ever Forward are being returned to where they were originally loaded onto the vessel, the Seagirt Marine Terminal in the Port of Baltimore. When they will get to their original destination is anybody’s guess, adding to the misery of cargo owners who are being stuck with general average charges.

In declaring general average on March 31, Evergreen Marine said that, after the incident happened, it “immediately activated its emergency response plan and appointed the salvor Donjon-Smit to conduct underwater inspections and design a refloating plan. The program included dredging around the stranded vessel to increase buoyancy and deploying tugboats for the rescue operation. With the approval by the competent authorities, dredging operation began on March 20. Subsequent to the completion of the initial dredging phase, the rescue team made two attempts to refloat Ever Forward on March 29 and 30. Unfortunately, both attempts proved to be unsuccessful.

“The dredging operation and refloating attempts have been conducted for the common safety of the vessel and cargo, and in the interests of all parties involved in the voyage. Considering that the complexity of further rescue operations will require more manpower, equipment and costs to refloat the stranded vessel as soon as possible, Evergreen has for cautionary purposes declared General Average and nominated Richards Hogg Lindley as the GA adjuster.”