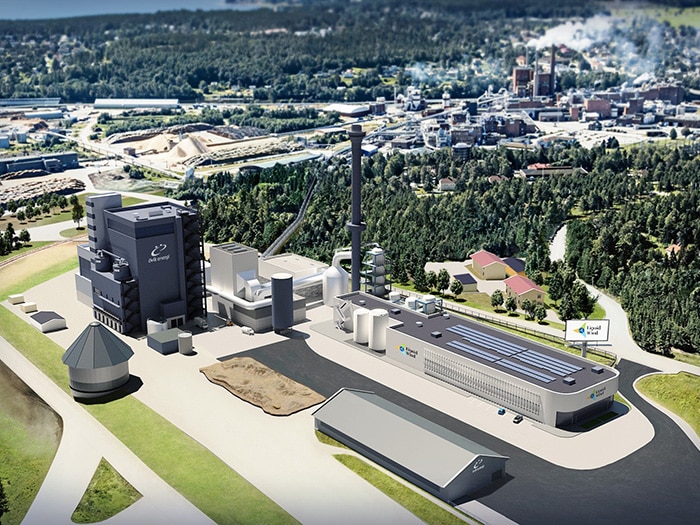 Ørsted is going all in on green e-methanol and sees green fuel for shipping as a major market. Its board has taken a final investment decision (FID) on the 50,000 tonnes/year FlagshipONE e-methanol project and Ørsted has acquiring the remaining 55% stake in the project from Liquid Wind AB, the original developer of the project..

Located in Örnsköldsvik in Northern Sweden, FlagshipONE will be Europe’s largest green e-methanol facility. FlagshipONE is expected to enter into operation in 2025 and will produce around 50,000 tonnes of e-methanol each year to help decarbonize the world’s shipping industry.

FlagshipONE will be Ørsted’s first commercial-scale Power-to-X facility and is an important steppingstone towards Ørsted’s ambition of taking a leading position in renewable hydrogen and green fuels.

Global shipping accounts for around 3% of global carbon emissions, and the sector is a focus area for Ørsted as the company expands its presence in Power-to-X across Northern Europe and the United States.

Ørsted’s ambitious green fuels pipeline includes developing the 300,000 tonne “Project Star” in the U.S. Gulf Coast area and the “Green Fuels for Denmark” project in Copenhagen, which will both produce significant volumes of e-methanol for shipping.

Today, green fuels for shipping carry a price premium compared to fossil-based alternatives, and Ørsted says the industry needs supportive regulation to incentivize demand and to drive the maturation of green fuels at scale and at speed. Until this regulation materializes, pricing of e-methanol, even from world-class Power-to-X assets like FlagshipONE, is subject to substantial uncertainties – and large-scale offtake appetite is yet to develop. Ørsted says it is prepared to lead the development of the Power-to-X industry and assume risk in the process – including by advancing strategic projects like FlagshipONE – but regulatory action that matches the ambitions of developers and shipping companies are urgently needed.

Ørsted will start onsite construction of FlagshipONE in the spring of 2023. The project will be located on the grounds of the biomass-fired combined heat and power plant Hörneborgsverket in Örnsköldsvik, operated by Övik Energi. The e-methanol from FlagshipONE will be produced using renewable electricity and biogenic carbon dioxide captured from Hörneborgsverket. In addition, FlagshipONE will use steam, process water, and cooling water from Hörneborgsverket. Excess heat from the e-methanol production process will be delivered back to Övik Energi and integrated in their district heating supply