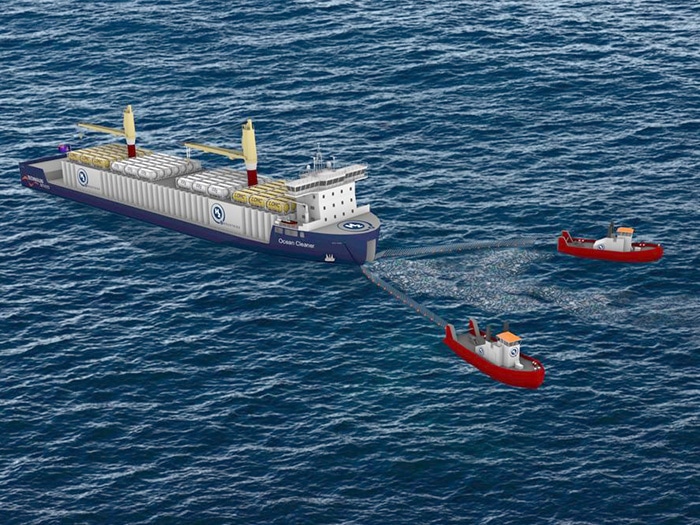 The ship that’s being designed to deal with ocean plastic pollution would be more than 150 meters in length.

Could the plastic waste polluting the world’s oceans be scooped up and converted into clean hydrogen at sea? That’s the plan behind an innovative concept ship design being developed by New York City headquartered H2 Industries and Hamburg, Germany, naval architect firm TECHNOLOG services GmbH.

According to the International Union for Conservation of Nature (IUCN) at least 14 million tons of plastic wasteend up in the ocean every year. Plastic is found on the shorelines of every continent, with especially high levels of plastic waste found near popular tourist destinations and densely populated areas.

The ship that’s being designed to deal with ocean plastic pollution would be more than 150 meters in length. It would travel at four knots with the waste plastic collected by two smaller vessels towing a two-mile net that funnels the waste from the surface and up to ten meters below it.

The most novel feature of the vessel would be its open bow design that allows the collected plastic waste to be fed onto conveyors and into the storage hold.

This waste will be converted into hydrogen by the same process that the H2-Industries is planning to use in plants on shore. For every 600 kg of waste collected, it says, approximately 100 kg of hydrogen can be produced and then, stored as liquid organic hydrogen carrier (LOHC), an oil-like liquid carrier medium for hydrogen. The LOHC would be stored in 20-foot containers that would be transferred to smaller vessels by onboard cranes for delivery to shore.

The ship will be designed to run on electric motors using the LOHC produced, on board, as its fuel and creating electricity using H2-Industries’ 19 inch eRelease racks. Each rack will hold 48 KW of installed power and multiple racks would deliver the approximately 2 MW that a ship of this size will require.

“It is becoming increasingly clear that the shipping industry can make a positive impact on reducing global emissions,” says Michael Stusch, CEO of H2-Industries. “At H2-Industries, the plan is to help decarbonize industry and power generation, while cleaning up our water resources and converting pollutants into an energy source. To achieve this, we are looking for investors. Once the investment is in place, we expect each ship will be built within roughly 24 months.”