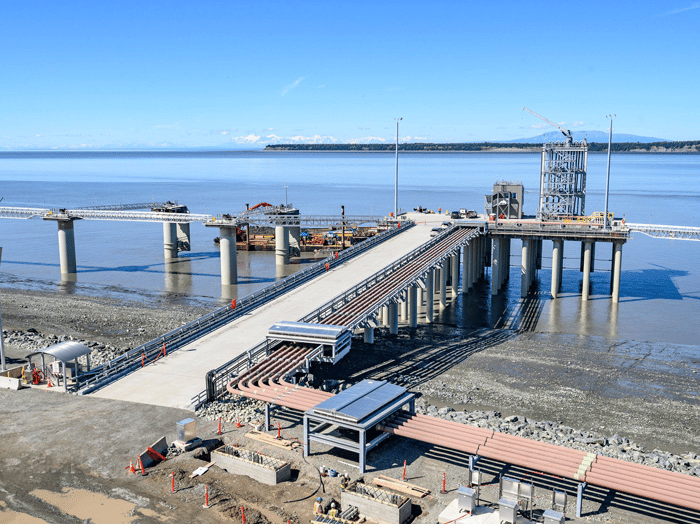 The modernization plan, which could reach $1.8 billion, will improve operations, safety and efficiency, and improve resiliency to earthquakes and other natural disasters. (Credit: Nikolas Zografos/Boom Media)

The construction of the five-part Port of Alaska (Anchorage) modernization project began in 2020 and is still well underway, with an expected completion date of 2028. Currently, the project’s first phase has been completed, and the total cost of the project could reach as high as $1.8 billion.

The port is a key transport hub for freight movement, linking marine, road, rail, pipeline and air cargo systems with communities all across Alaska’s 665,4000 square miles. The port handles more than 3.5 million tons of food, building materials, cars, clothing, cement and other goods that Alaskans need every day. If it’s needed in Alaska, it’s probably coming through the port.

The first terminal to be constructed was the port’s Petroleum and Cement Terminal (PCT). The new terminal replaces the port’s primary petroleum terminal, which opened in 1965. The previous port suffered significant structural damage in a November 2018 earthquake and had become severely corroded.

The PCT will be a pile-supported dock located south of existing terminals and adjacent to a cement-storage dome. It will replace Petroleum Oil Lubricants Terminal 1 (POL1), Port of Alaska’s primary petroleum terminal and Alaska’s only dock equipped with a pneumatic, bulk cement unloading and transfer system.

The overarching objective of the modernization plan is to improve port operations, safety and efficiency; accommodate modern shipping operations; and improve resiliency to earthquakes and other disasters.

Three double-leaf roof hatches manufactured by BILCO allow access to fuel piping expansion joints. The custom-made motorized hatches are so large—10 by 20 feet—that each leaf had to be shipped separately. The hatches were assembled on-site.

The permit for the PCT project required a team of marine mammal observers to monitor a protected area close to the construction zone and to cease operations when beluga whales entered the project vicinity.

In July, Alaska officials approved more than $400 million for port upgrades and construction of a cruise ship passenger dock.

The state’s fiscal year 2023 capital budget, which Gov. Mike Dunleavy (R) signed June 30, includes $200 million for the Port of Alaska modernization program in Anchorage, with half of the funds contingent on the port finding matching money. Jim Jager, director of business continuity and external affairs for Port of Alaska, says the port has already applied for federal funding it could use to match the state funds.