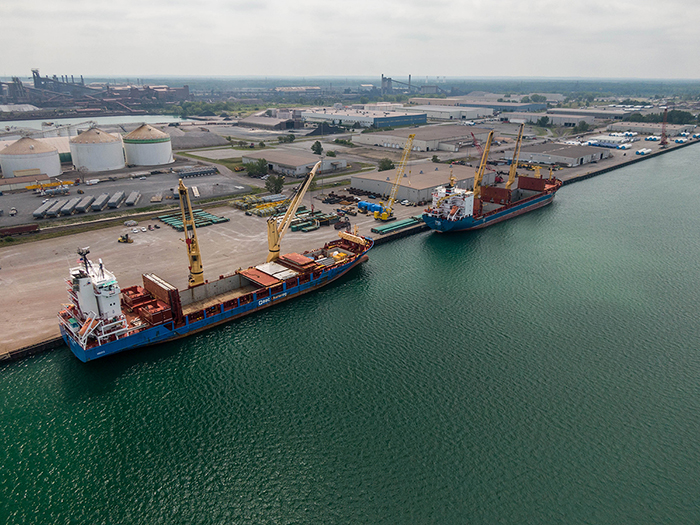 Project cargoes will be brought by a total of six ships

The Port of Indiana-Burns Harbor is handling the primary shipments for a $1 billion natural gas fired power plant project at the Indeck Niles Energy Center in Michigan. More than 600 pieces of cargo, some weighing up to 300 tons and 100-feet long, are being shipped through the northern Indiana port destined for Niles, Mich.

In total, there will be six vessels arriving with the cargoes from June through August, the first of which was the BBC Florida on June 29.

The largest piece being shipped to the deep-water port weighs just over 306 tons and measures 100 feet long, 12 feet high and 15 feet wide. It is a steam recovery system, also known as a Heat Recovery Steam Generator.

“We have seen an uptick in large project cargo shipments this year for power plants and wind energy components, but the size and scope of this project make it one of the largest shipments in our port’s 50-year history,” said Port of Indiana-Burns Harbor Port Director Ian Hirt. “It is not every day you get to see our port companies and labor force handling 600 pieces of cargo for one massive power plant project.”

The Lake Michigan port is a leading Midwestern hub for shipping heavy lift and project cargo because of its ocean access, proximity to the U.S. heartland, and its capability of handling large-dimensioned cargo. Additionally, the Great Lakes allow over-sized cargoes to be transported into the Midwest by ocean vessel, eliminating the need for driving trucks hundreds of miles from a coastal port.

The shipments will traverse halfway around the world before entering the St. Lawrence Seaway that connects the Atlantic Ocean to the Great Lakes. The cargoes are arriving on the vessels BBC Florida, Timgad, Freida, Calypso, BBC Mont Blanc, and BBC Greenland.

“The project volume, totaling 25,000 cubic meters, is comparable to 10 Statues of Liberty,” Hirt said. “Watching cargoes this large move through the port is awe-inspiring.”

Federal Marine Terminals (FMT), the port’s general cargo stevedore, will unload the large project cargoes and transload them to the port’s storage yard on an 84-axle truck, before being trucked to the final destination at the natural-gas power plant site in Niles.

The Indeck Niles Energy Center will be a next generation, state-of-the-art energy center fueled by clean natural gas. The facility will use combined-cycle technology to generate electricity. In a combined-cycle process, energy is produced through a gas turbine and the excess heat is recovered and converted to steam to produce additional electricity.

The power plant construction commenced in August 2019 and the expected commercial operation date is March 2022.