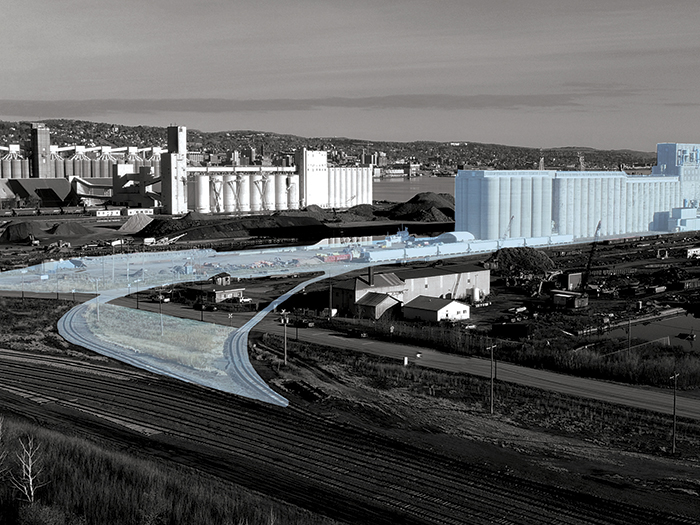 Located immediately northwest of the port authority’s First Clure Terminal Expansion, but separated from it by the Azcon Metals recycling property, the 7.5-acre Duluth Lake Port dock and 3.5-acre slip date back to the 1880s, when Duluth Imperial Mill built the site’s initial flour mill and grain elevators.

The facility was last used for grain in 2015. TN LLC purchased the site in 2017. The port authority acquired it from TN LLC in a $950,000 deal that closed December 1. The purchase included land, structures, Seaway-depth slip and 3,000 feet of on-dock rail connected to the Clure Public Marine Terminal and the CN Duluth Intermodal Terminal.

Presently, Duluth Cargo Connect operates the site’s rail assets and a shop building; J.F. Brennan also leases a portion of the site to store material and equipment for its maritime engineering operations.

“Our future use of this property is still in the planning phases, but our goal is to revitalize the pier and bring it back to life in a way that contributes to our regional economy and further expands Duluth Cargo Connect’s service to customers within our region and around the globe,” said Deb DeLuca, executive director of the Duluth Seaway Port Authority. “In the long term, it could become a second expansion of the Clure Terminal.”

The initial Clure Terminal expansion was a long-term Port Authority project that transformed a dilapidated adjacent dock into a vibrant piece of the Duluth Cargo Connect multimodal logistics hub. This season, that expansion property played an essential role in the port’s record-setting wind energy cargo campaign.

The site’s more immediate future could involve demolition of the grain elevator structures, or the port authority could seek to accommodate the storage and trade of a non-agricultural bulk commodity with the existing elevators. Rehabilitation of the pier’s dock walls is a priority to secure the site and open possibilities for future freight-related use.

“We’re excited to acquire this property, which will help us strengthen the port’s working waterfront, enhance trade and bring new opportunities to Rice’s Point,” said DeLuca.