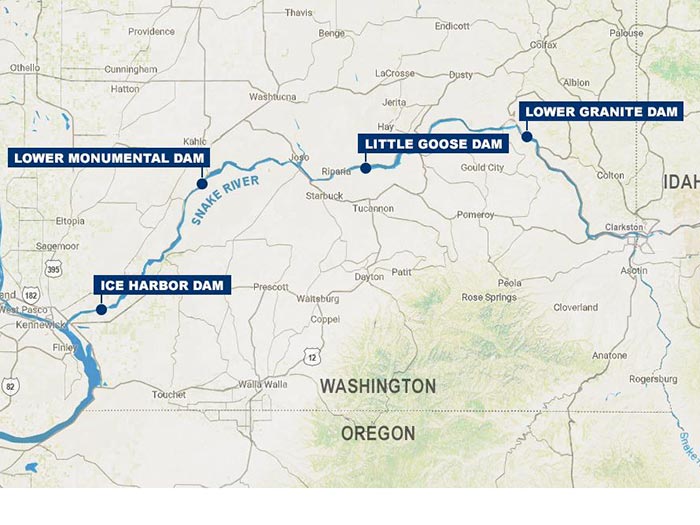 Environmentalists are pushing for the removal of four dams on the lower Snake River in the hopes that this would improve salmon stock. Recently, the State of Washington released a draft Lower Snake River Dams Engagement report that is available for public comment until January 24.

Though the removal of the dams might theoretically be good for salmon, it would be bad for barging and, according to an independent evaluation commissioned by the Pacific Northwest Waterways Association, it would cost the U.S. over $2.3 billion over the next 30 years, lead to significant additional carbon emissions that contribute to climate change, and jeopardize health, safety and livelihoods in already economically fragile local and regional economies.

The study was performed by financial and economic consultants FCS Group to assess several impacts that would result if barging on the Snake River is lost.

Significant additional effects due to the loss of hydropower, irrigation and other authorized uses would also occur, but are not captured in this targeted report.

Carbon emissions equivalent to the cumulative emissions generated by a Boardman coal-fired power plant every 5-6 years would result.

Breaching the Snake River dams would cause diesel fuel consumption to increase by nearly five million gallons per year as barges are replaced by less efficient truck-to-rail shipments. At least 201 additional unit trains and 23.8 million miles in additional trucking activity would be required annually, resulting in increases in CO2 and other harmful emissions by over 1.2 million tons per year.

If farm subsidies are not increased, over 1,100 farms might be at risk of bankruptcy. Average regional net farm cash income was only $42,825 in 2017. With wheat prices already down near the break-even point, the federal government would need to increase annual direct payments to farmers by up to $38.8 million to maintain current income levels.

Highway, rail and grain elevator networks would need over $1.6 billion in capital investment. If barging were removed from the Snake River, new infrastructure or costly upgrades would be needed to accommodate the displaced cargo. This includes hundreds of miles of shortline rail track that have been abandoned, new rail, major highway improvements, and retrofits for grain elevators that do not have rail loading capabilities.

Essential health, sanitation and safety would be jeopardized, along with other public services. As observed in the 1992 Snake River drawdown experiment, existing wastewater infrastructure would likely be damaged or rendered useless if the river level drops, requiring new investments in water intakes, filtration and pumping/transmission systems for a number of cities, counties and major industrial businesses. Roadways, public docks and other infrastructure that are adjacent to the river would also be damaged or rendered useless.

Safety is also a major concern, with additional rail and truck traffic leading to corresponding increases in accidents and fatalities.

The impacts would be socially unjust and target fragile economies. The 10 counties most impacted by a dam breaching scenario are primarily rural areas in which 1 in 5 people are already at or below the federal poverty level, and average wages are 25% below the national average. Dam breaching would have a negative regional economic impact on agriculture, manufacturing, transportation, warehousing and tourism businesses that are physically or functionally related to freight movement and river access.

“Dam breaching extremists talk about how easy and inexpensive it would be to compensate Washington, Oregon and Idaho businesses and residents if the lower Snake River dams were removed,” said PNWA Executive Director Kristin Meira. “We commissioned this study to show federal and state decision makers the real economic and environmental impacts on real people and communities that would result.”