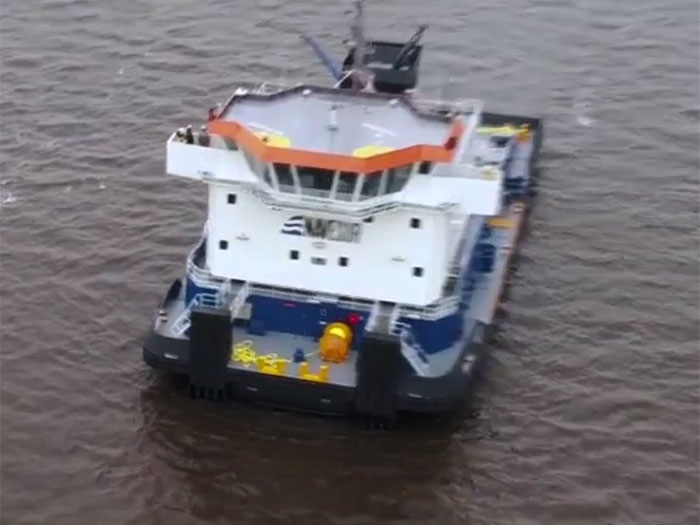 OCTOBER 1, 2018 — Paraguay’s Tsuneishi Shipyard, a subsidiary of Japan’s Tsuneishi Group, recently delivered the powerful towboat Tebicuary 3 to her owners Navegación del Sur S.A. (Navesur). The vessel will work on the Paraguay-Paraná River system and is a near sister-ship to the Ceasar Primo, delivered to a different operator in 2015.

At 6,400 hp, Tebicuary 3 is more powerful than most of the towboats currently working on the river system. The power derives from four Cummins KTA50 engines, each developing 1,600 hp at 1,800 rev/min.

The boat measures 43 m by 18 m with an operating draft of only 1.83 meters allowing it to push barges into most areas of the inland waterway.

In addition to the Cummins propulsion engines, the Tebicuary 3 is fitted with two Cummins Marine NTA855-powered 240 kVA / 50 hz (Total Power: 480 kVA) generator sets. There is also a Cummins 6B CS 93 kVa / 50 Hz emergency generator set. All the engines and gensets have ClassNK certificates.

With Cummins C Command electronic controls the engines will be able to maximize fuel efficiency and savings.