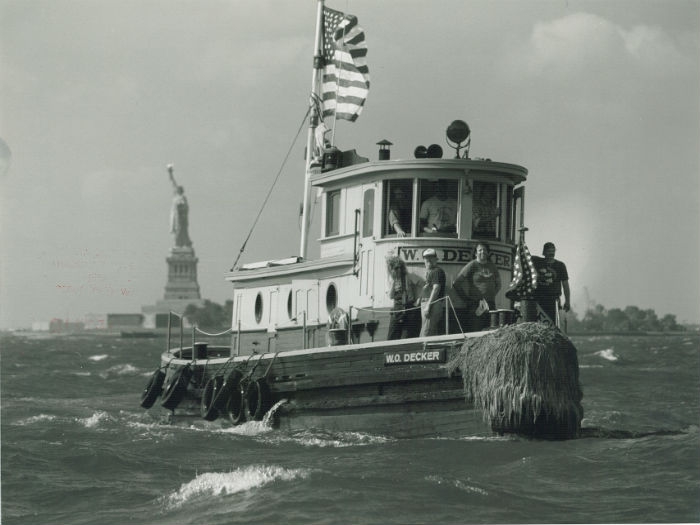 AUGUST 2, 2017—The South Street Seaport Museum in downtown Manhattan plays a vital role in showcasing New York City’s maritime heritage. The museum accomplishes this not only through its special exhibitions, educational programs and tours, but also through its “Street of Ships”—a fleet of historic vessels that visitors can tour and sail on.

One of those is the W.O. Decker, the last of the New York-built wooden steamboat tugs. The museum has announced the commencement of the restoration of the W.O. Decker, thanks to the receipt of a $200,000 Maritime Heritage Grant from the National Park Service. In partnership with the U.S. Department of Transportation’s Maritime Administration (MARAD), the National Park Service awarded grants for projects that teach about and preserve sites and objects related to our nation’s maritime history.

Capt. Jonathan Boulware, Executive Director of the Seaport Museum, calls the W.O. Decker, “a key part of our fleet of ships that tell the story of Where New York Begins.” Says Capt. Boulware, “We’ve been working toward this project for years, and at last we are ready to proceed! Paired with a generous $200,000 challenge grant from George A. Matteson, author of the book Tugboats of New York, this National Parks grant gets W.O. Decker to the shipyard. While the actual project budget will exceed the $400,000 in hand, these two funds will get the project started and take care of the bulk of the work.”

A shipyard has not yet been selected for the work. Boulware tells Marine Log that the museum is reaching out to a number of specialist yards and shipwright teams to conduct the delicate restoration work.

“The deckhouse will be removed to create access for the work and her deck beams and decking material will be entirely replaced,” says Boulware. He says new laminated deck beams will support a fir deck and her deckhouse will be replaced with numerous repairs made to that structure as well. The W.O. Decker’s diesel engine will be removed and overhauled and her fuel tanks will be replaced. “And perhaps most significant,” says Boulware, “she will undergo a recertification from the U.S. Coast Guard to permit her operation as a passenger vessel once again.”

Built in 1930 by Newtown Creek Towing Company as the Russell I, the W.O. Decker is the last surviving, New York-built, wooden steam tug (later refitted with a diesel engine.)  In 1946, she was renamed W.O. Decker  after being sold to the Decker family’s Staten Island tugboat firm and was donated to the Seaport Museum in 1986. Decker is listed on the National Register of Historic Places and is an exemplary model of the types of steam tugs that were once an abundant sight in New York Harbor.