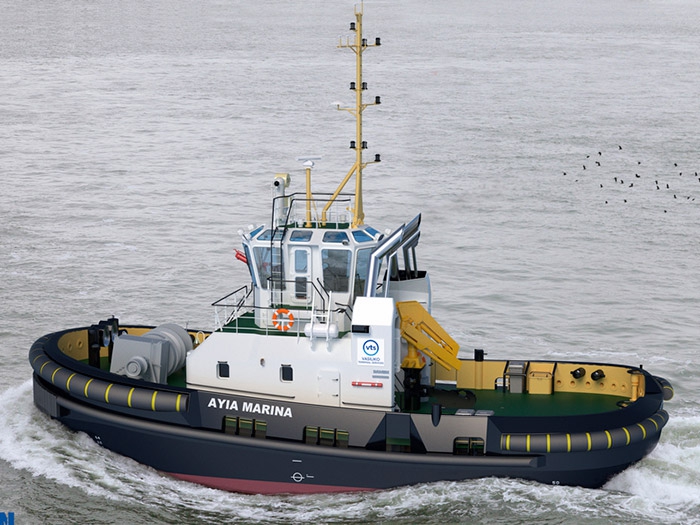 “When we first began our business four years ago, our client wanted us to use state-of-the-art vessels and recommended Damen tugs,” says CEO Yiannos Lakkotrypis.

The company placed an order for two Damen ASD Tugs 3212, which have been providing marine services to the VTTV Oil Terminal Jetty since 2014, where they have gained a strong reputation for their performance:

“The two tugs are considered in Cyprus, and the Eastern Mediterranean for that matter, as state-of-the-art tools for the provision of marine services,” says Mr. Lakkotrypis.

Now, he says, the company is expanding rapidly and is in need of another Damen vessel to enhance its fleet.

The new ASD Tug 2310, which is to be named Ayia Marina, is a standardized vessel from the Damen portfolio, but has been enhanced with some specific custom requirements from Vasiliko Terminal Services.

“Chief amongst these features is a firefighting capabilitiy of 1,200 cu.m/hr so the vessel can operate at the oil terminal, and also in order to respond to instances of coastal oil pollution. We are also having a crane installed to enable us to more easily load and discharge equipment,” says Chief Operations Officer Captain Stelios Christoforou.

Damen sales manager Stephan Stout says, “We have developed an excellent relationship with Vasiliko Terminal Services since their previous order for two ASD Tugs 3212. It’s always a pleasure when a customer returns to Damen as it confirms we are going in the right direction in terms of providing our clients with proven, standard designs that can be tailored to meet their individual requirements.”

Because of Damen’s philosophy of building for stock, the construction of the ASD Tug 2310 was already advanced when the contract was signed. The vessel is being constructed at Damen Shipyards Changde in China and will be delivered to the client in Cyprus before the end of the year.