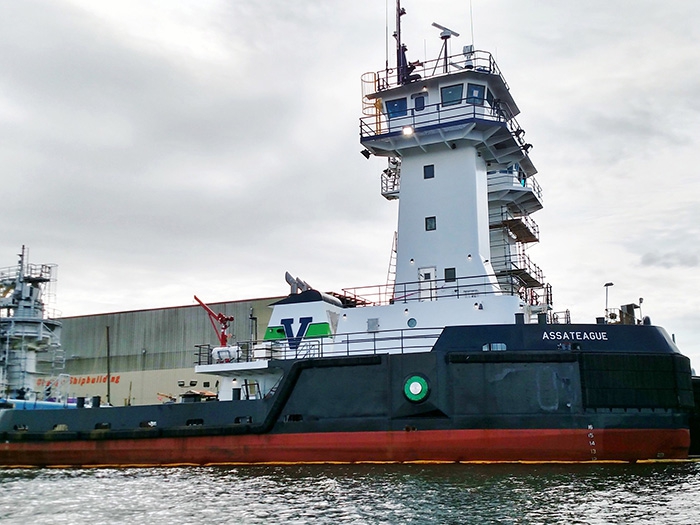 The Assateague alongside at the builder's Orange, Texas, shipyard

The first tug is the Assateague, the other two boats will be the Chincoteague and the Wachapreague.

Designed by Greg Castleman of Castleman Maritime, LLC, League City, TX, each 110-foot by 38-foot tug is being mated to an 80,000-barrel barge being built by Conrad Shipyard’s, Amelia, LA. These barges measure 405 feet by 74 feet.

Crew access to the barges is facilitated by a Schoellhorn-Albrecht custom gangway. Coastal Marine Equipment, Gulfport, MS, is supplying deck capstans on the tugs.

One of the Assateague’s two 2200 horsepower each Cummins QSK60-M engines, with Reintjes WAF 873 reduction gear

Propulsion power is provided by a pair of Cummins QSK60M, Tier 3 engines, each rated at 2,200 HP, and coupled to Reintjes WAF 873 gears with 7.087:1 reduction turning 102-inch 4-bladed bronze propellers mounted on 9.5-inch shafts.

The Reintjes gears are being supplied by Karl Senner, LLC, Kenner, LA.

The tugs have accommodations for up to ten crew members.