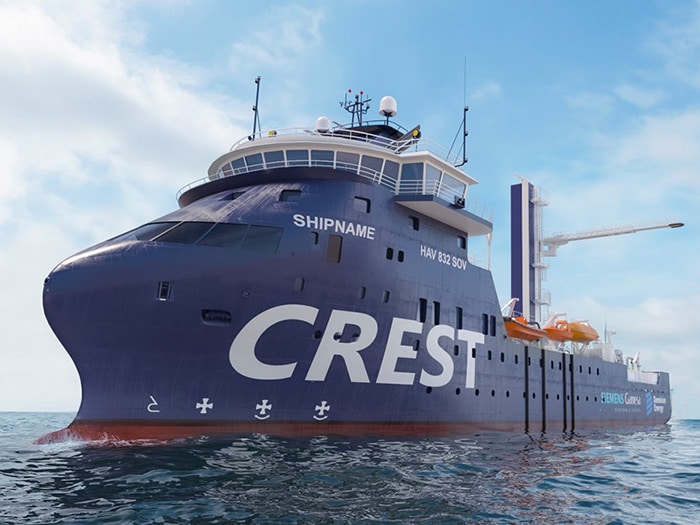 The HAV 832 SOV design has been developed by Norway's Hav Design, a subsidiary of HAV Group ASA.

Fincantieri Marine Group (FMG) has reached agreement on a contract with CREST Wind, a joint venture between Crowley and Crowley and Esbjerg, Denmark-headquartered Esvagt, to design and build a 288-foot HAV 832 Service Operation Vessel (SOV).

As we reported yesterday, the vessel will operate under a long-term charter with Siemens Gamesa Renewable Energy to support Siemens Gamesa’s service operations on the Dominion Energy Coastal Virginia Offshore Wind project.

The SOV will be built at FMG’s Fincantieri Bay Shipbuilding (FBS) in Sturgeon Bay, Wis., with support from Crowley’s on-site construction management group, and is set to go into service in 2026.

“We are proud to be associated with important ‘green’ projects like this,” said Marco Galbiati, CEO of Fincantieri Marine Group. “The SOV market is one of the most interesting and important markets for our company.”

“We are excited to partner with CREST in the construction of this SOV,” said Craig Perciavalle, vice president of FBS. “The incredible shipbuilding professionals here at FBS are eager to successfully execute this important strategic program and to continue to solidify our position as a premier shipbuilding supplier in the offshore wind market.”

Kristian O. Jakobsen, Deputy CEO of Esvagt said, “The partnership between Fincantieri Bay Shipbuilding and CREST has been developing for some time, and it has been a great pleasure to cooperate with such dedicated and accommodating professionals from FBS, and we look forward to continue the journey together within the green energy transformation in the U.S.”

The HAV 832 design has been developed by Norway’s Hav Design, a subsidiary of HAV Group ASA.

“We have designed and developed numerous SOVs for use in demanding offshore climates, but this is the first time we are designing a vessel for the U.S. market. We are confident in the operational benefits our vessel design brings to the table, so we believe that this contract can open the door for further work in the USA,” said Gisle Vinjevoll Thrane, vice president of sales at HAV Design.