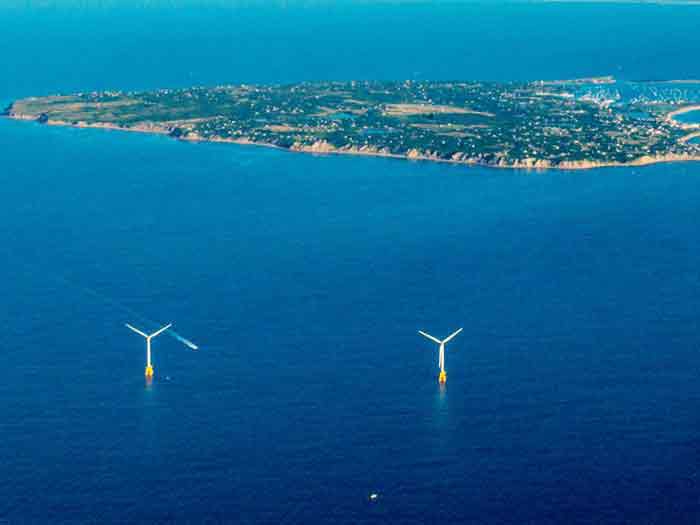 DECEMBER 13, 2016 — America’s first offshore wind farm is up and running. Deepwater Wind reported yesterday that the Block Island Wind Farm has completed its commissioning and testing phases and has begun commercial operations, delivering electricity into the New England region’s grid on a regular basis.

“Rhode Island is proud to be home to the nation’s first offshore wind farm – and I’m proud to be the only governor in America who can say we have steel in the water and blades spinning over the ocean,” said Rhode Island Governor Gina M. Raimondo. “With this project, we’ve put hundreds of our local workers to work at-sea and at our world-class ports and are growing this innovative industry. I applaud Deepwater Wind for leading the way.”

“Our success here is a testament to the hard work of hundreds of local workers who helped build this historic project, and to the Block Islanders and the thousands more around the U.S. who’ve supported us every step of the way of this amazing journey,” said Deepwater Wind CEO Jeffrey Grybowski.

Prior to Block Island officially coming on line, technicians from GE Renewable Energy, which supplied the project’s five offshore wind turbines, put the wind farm through its paces during a four-month testing period. The project’s crew transfer vessel, the Rhode Island-built Atlantic Pioneer, transported technicians to the wind farm around the clock.

“Rhode Island’s tradesmen and women were proud to partner with America’s leading offshore wind developer to help build this historic project,” said Michael F. Sabitoni, President of the Rhode Island Building and Construction Trades Council. “We’re confident that this is just the first of many offshore wind projects that will put Americans to work up and down the East Coast for decades to come as we commit to a renewable energy future.”