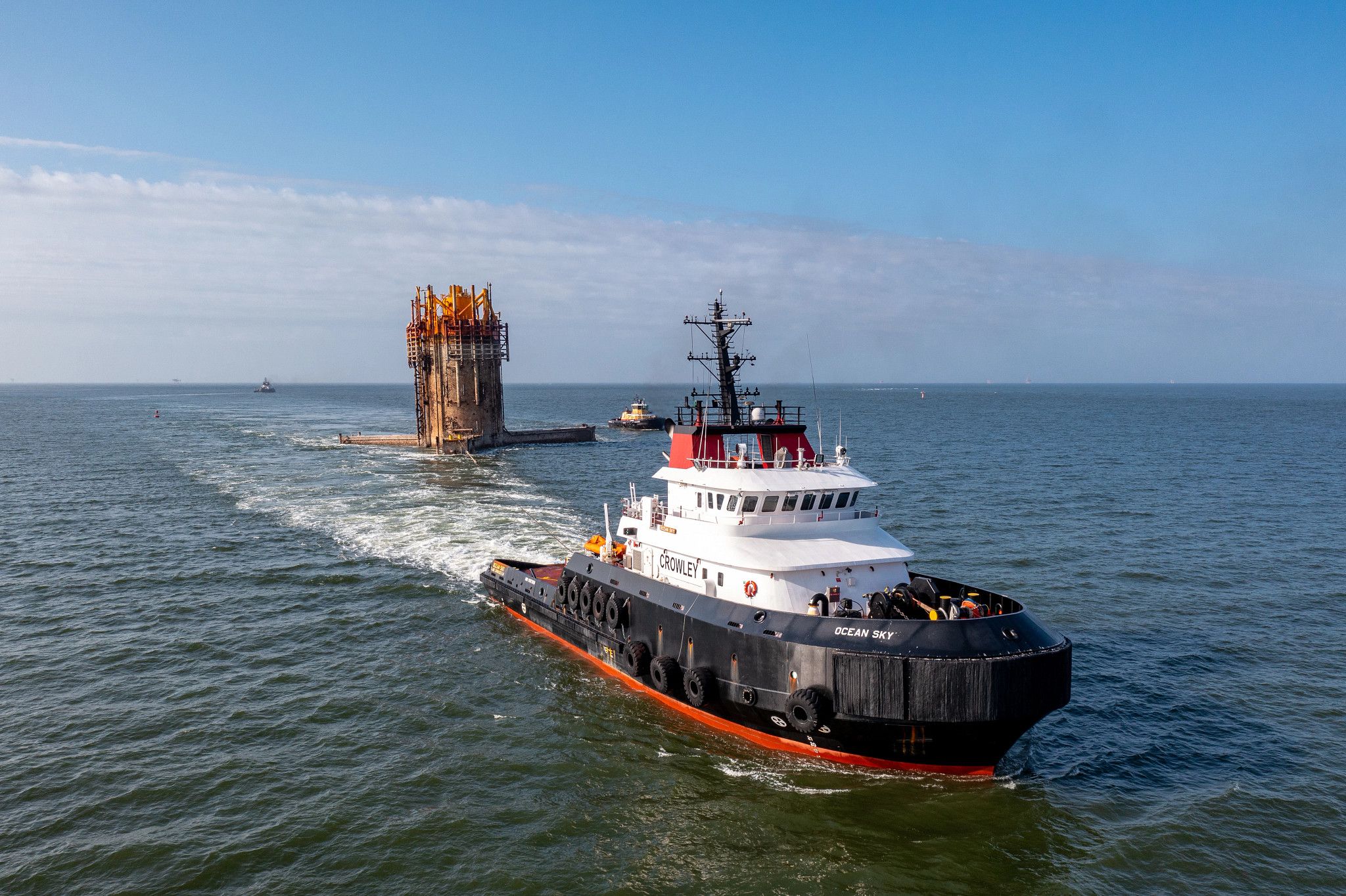 Crowley’s Ocean class tug Ocean Wind was the lead tug for the tow of decommissioned TLP.

Showcasing its capability and versatility in providing total lifecycle solutions to the offshore energy sector, Crowley recently assisted with the historic removal of the Morpeth field tension leg platform (TLP) in the U.S. Gulf of Mexico.

The Sir Douglas Morpeth was in 1,700 feet of water, and was the first TLP to receive full classification, or to have its structural adequacy reviewed by all marine systems. The TLP was used to develop the Morpeth oil field in the Gulf of Mexico, which reportedly held around 66 billion-barrel reserves and 67 billion cubic feet of natural gas.

The TLP was installed in 1998. Production ceased in 2018 and the plans for decommissioning the rig began shortly thereafter. The end of this TLP’s lifecycle will differ from those decommissioned before it because it will be the first from the Gulf of Mexico to be recycled.

Crowley was selected for the project for several key reasons. First, was the company’s long history of oil and gas support in the deep waters of the Gulf of Mexico, including an impressive track record of safe tow-outs and set downs.

Additionally, the operation required key pieces of equipment, which included Crowley’s heavy lift deck barge 455-6 in addition to three of the company’s Ocean Class, dynamic positioning tugboats. This class of tugs not only has 150 tons of bollard pull but once stationary can hold position within a square meter for extended periods of time. Crowley is the only maritime company in the Gulf of Mexico with this combination of Jones Act equipment.

THE JOURNEY TO A NEW ENDEAVOR

Throughout the decommission project, Crowley’s operations and engineering teams were highly engaged. They carefully choreographed and monitored the sequence of events, including barge retrofitting and tow hand-off from Crowley’s Ocean class tug to another contracted tug, which completed the nearshore portion of the tow.

Ocean Sky, Ocean Wind, and Ocean Wave were used during the positioning phase. They were arranged in a triangular pattern, each attached to one of the legs of the platform. The tugs then pulled in opposite directions to ensure that the platform remained stationary while the tendons were removed.

LOOKING TO THE FUTURE

Crowley is actively involved in market research regarding the outlook of decommissioning rigs over the coming years. The findings of these studies indicate that the maritime industry may see a surge of decommissions beginning to take place in the Gulf of Mexico.

This provides an excellent opportunity for Crowley to demonstrate its ability to provide total lifecycle support. This support spans from assisting the rig to its designated position in the ocean, to helping decommission the rig when its time comes. Crowley is an ever-expanding organization as it flexes to meet the strategic needs of its customers.