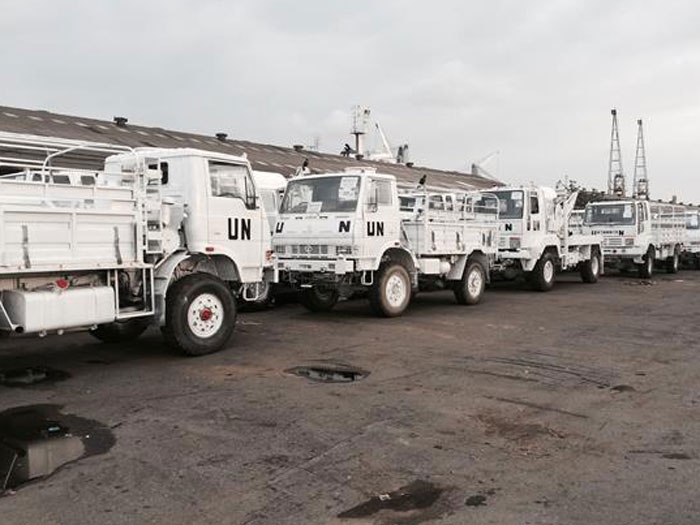 SEPTEMBER 26, 2015 — Höegh Autoliners says that Höegh Transporter has finally been released from detention in Mombasa, Kenya, and has continued its voyage to South Africa, West Africa, and Mexico, after being delayed by more than one week.

The vessel’s problems began September 17 when the 57,757 gt vehicle carrier  was boarded by Kenyan authorities, who requested to inspect the cargo to be discharged in Mombasa.

The vessel was carrying a consignment of United Nations (UN) vehicles from Mumbai, India, destined for the UN peacekeeping mission in the Democratic Republic of Congo.

Today, Höegh Autoliners said that no crew had been arrested and no drugs had been found.

The weapons found in the UN trucks were a consignment of handguns shipped by the United Nations from Mumbai, India, to Mombasa, in transit for the United Nations peacekeeping mission in the Democratic Republic of Congo. The vehicles had originally been loaded by Indian military personnel.

“It is Höegh Autoliners’ policy not to load weapons on vessels engaged in civilian traffic,” says the company. “Had we been aware of the presence of guns inside this consignment of vehicles shipped by United Nations, the cargo would neither have been booked nor loaded. The fact that the vehicles contained guns which were loaded without our knowledge caused a breach of Kenyan laws and our own strict policies. It is highly regrettable that a grave mistake on the part of the shipper has caused major difficulties and delays for other customers, the crew and ship.”

“The cooperation with the local authorities has been good, and their reaction understandable given the seriousness of the issue,” said Höegh, adding that “certain media” had added to the tension by publishing “inaccurate and wildly speculative stories.”