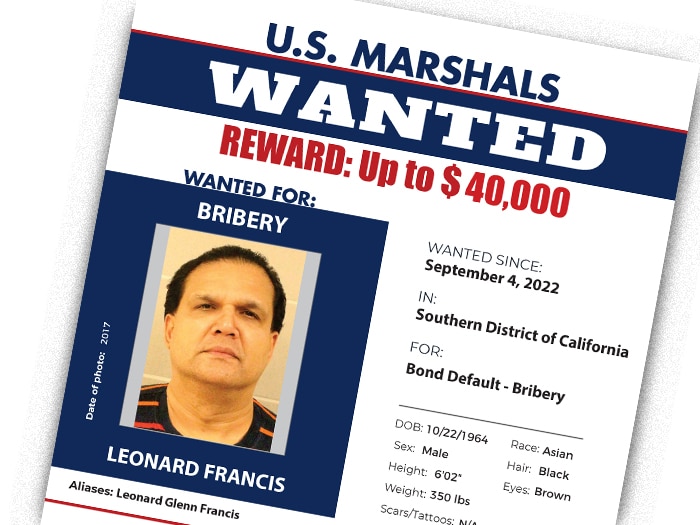 Leonard Glenn Francis, otherwise known as "Fat Leonard," now has his face on a wanted poster.

The U.S. Marshals Service and Naval Criminal Investigative Service are offering a combined reward of up to $40,000 ($20,000 from each agency) for any information leading up to the arrest of fugitive Leonard Glenn Francis.

Infamous as “Fat Leonard,” Francis is the man at the center of the biggest bribery scandal to hit the U.S. Navy and had been under house arrest in San Diego since his guilty plea in 2015, under going treatment for cancer — and podcasting.

At last count, the long-running fraud and bribery investigation has resulted in federal criminal charges against 34 U.S. Navy officials, with 33 defendants convicted of various fraud and corruption offenses, while a federal jury failed to reach a verdict on charges brought against retired Rear Admiral Bruce Loveless

Scheduled to soon be sentenced for his role in the $35 million scandal, Francis allegedly cut off his GPS monitor and left his home on the morning of Sept. 4.

According to media reports, neighbors witnessed U-Haul moving trucks outside Francis’ home in the days before his escape.

His current whereabouts are unknown. However, Francis’s home is about a 40-minute drive from the Mexican border, where, local media have noted vehicles stream into Tijuana and are only stopped randomly.

Think you’ve spotted Fat Leonard? Anyone with information on Francis’s whereabouts should contact the U.S. Marshals at 877-926-8332. Anonymous tips may also be submitted via the USMS Tips App.