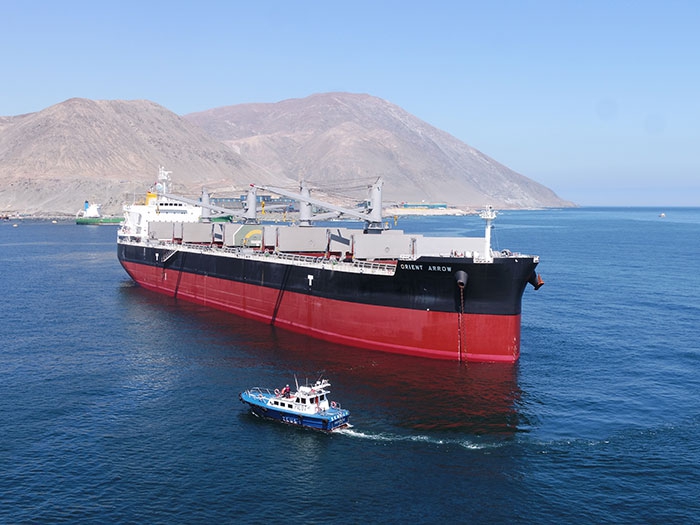 BHP ships more than 300 million tonnes of iron ore, coal and copper to customers around the world annually and is one of the largest charterers of dry bulk carriers in the world

OCTOBER 15, 2018 — BHP Billiton, one of the world’s largest charterers of dry bulk carriers in the world, plans to use drones to bring safety benefits and efficiency gains to its ocean freight operations.

BHP’s Vice President of Marketing Freight, Rashpal Bhatti, sees the potential for drones to be a key part of a tablet-based technological package, incorporating artificial intelligence that provides captains a digital view of their ship.

“All of our chartered ships receive a tablet when they berth. And on the tablet they can read the tension of the mooring line, which has major safety benefits,” says Bhatti, “The question now is can the same tablet become a holistic technological package by also delivering ship hold inspection data, draft readings and other critical information captured by drones. It’s all a bit futuristic but that is the direction we are going.”

BHP was an early adopter of drones across its mine sites and says that, like the drones being used in other areas of BHP’s operations, marine drones can be programed to carry a range of specific tasks.

BHP sees clear and immediate advantages from using drones in the inspection of holds and in the taking of draft readings. It also points to their nimbleness in the seemingly simple but important task of advising the ship’s bridge on the water position of the rudder.

Hold inspection reports would continue to be independent assessments but the use of drones promises to cut inspection times per hold from an hour to 15 minutes.

“The hold inspection process involves ships which have five to nine holds which a person checks by climbing down ladders,” says Bhatti. “The inspector has to be physically fit, use fall protection, and carry an oxygen meter to make sure there is enough air in the hold. And it takes a lot of time.

“With drones, we can fly them into a hold and capture 4K images, while infra-red, and other types of cameras that can show cracks or other specific parameters that cannot be seen with the naked eye.

“So you have a better way to assess the condition of the hold, and you are removing a person from a potentially hazardous situation.”

BHP is also testing the use of drones to improve the safety, time and cost of ship draft readings. This is usually done from a boat when the ship is berthed and ready for a cargo.

One of the logistical challenges to overcome is to get the drones on ships when they are offshore at anchorage, as distinct from being berthed.

“We are working with ship owners on this and other ways to use technology to improve safety and productivity,” Bhatti says.