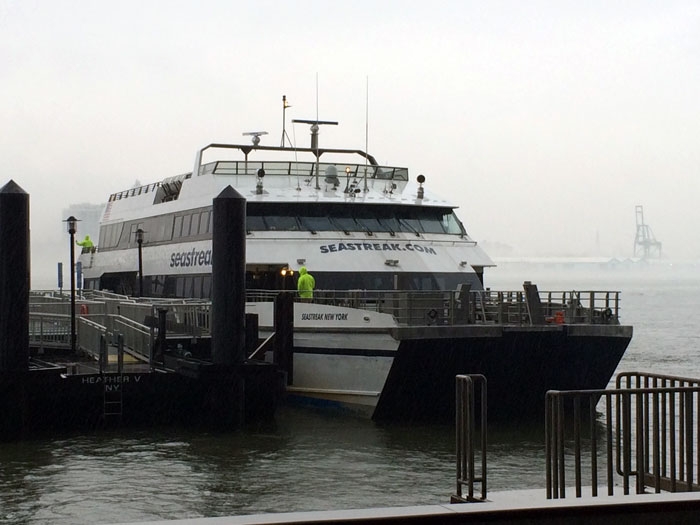 JANUARY 14, 2014—Despite the devastating impact of Super Storm Sandy on New York City’s shoreline communities in 2012, development of residential properties along the waterfront of the city’s five boroughs is booming. To serve the transportation needs of these fast-growing waterfront neighborhoods, New York City is examining the possibility of creating new ferry services.

The second report, Ferry Policy and Planning in New York City: Considerations for a Five-Borough Ferry System, is a white paper on best practices gleaned during the implementation process for services such as the East River Ferry, Red Hook summer service and Rockaway commuter ferry service.

Last year, the pilot project East River Ferry carried 3,200 average daily riders during weekdays and served 1.2 million riders in 2013. While this may see insiginficant when compared to the Staten Island Ferry, which carries upwards of 22 million riders annually, smaller private ferries are vital lifelines for connecting the neighborhoods of the outer boroughs with Manhattan.

Working with the NYCEDC, Consultants Steer Davies Gleave considered anticipated ridership at each potential new location, projected new development, and relative operating costs. The Citywide Ferry Study also evaluated economic impacts derived from ferry service, showing the positive impact ferry service can have when introduced along the city’s revitalized waterfronts. For example, residential property values within 1/8 of a mile of the East River Ferry stops in Brooklyn and Queens increased 8% as compared with property values further from the stops.

While most people are familiar with the icon Staten Island Ferry—large, double-end ferries that can carry up to 6,000 passengers—the other commuter ferries operating in New York Harbor are privately owned, passenger-only either monohull or catamaran ferries, with bow and side-loading designs. Spud barges are commonly used as ferry landings for these smaller vessels. According to the Citywide Ferry Study, the cost of a new landing can be from $2 million to $7 million, depending on factors such as water depth, soil and shoreline conditions, and access to utility infrastructure such as power.