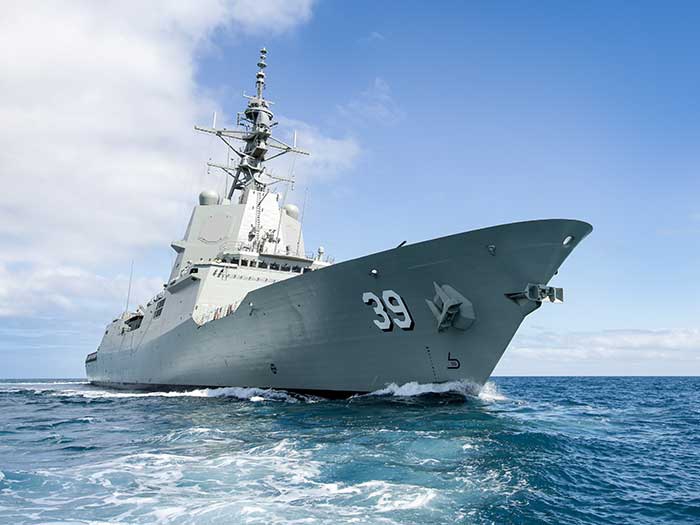 Built around an Aegis combat system modified for Australian needs, the ships are based on the Navantia designed F100. The Air Warfare Destroyer Alliance consists of the Australian Department of Defence, shipbuilder ASC and mission systems integrator, Raytheon Australia. Platform designer Navantia is listed as a capability partner, with the U.S.Navy and its Aegis Weapon System Engineering Agent, Lockheed Martin, delivering the Aegis capability to the Hobart Class AWDs.

In fact, completion of the trials marks a rare milestone in what has been a problem plagued project, with the program predicted to have a minimum cost overrun of A$1.2 billion by the time it is complete and, while originally the destroyers were sheduled to be operational between December 2014 and June 2017 they are now reportedly set to deiver in June 2017, September 2018, and March 2020. The program remains on the “Major Projects of Concern” list of the Australian National Audit Office.

Still, none of this seemed to be on anyone’s mind at the end of the builder’s trial,

“This first phase of sea trials, conducted over several days in the local South Australian waters, marks the successful testing of the ship’s hull, propulsion and navigation systems. A second phase of more advanced trials will take place in early 2017 when Hobart trials its combat and communications systems,” said Mr. Beckett. “It’s the culmination of years of design and procurement, construction and outfitting, system testing, training and equipment activation. It gives me an enormous sense of pride in seeing our hard work culminate in a successful trial period at sea.”

“Today is a day when everyone who works in Australia’s highly skilled and professional naval shipbuilding industry can stand tall and be immensely proud. Sea trials is a visible demonstration of our success as a shipbuilding team,” said ASC Shipbuilding CEO Mark Lamarre. “Moving forward, the highly skilled ASC workforce will continue to consolidate and outfit the remaining two destroyers Brisbane and Sydney, implementing lessons learnt from Hobart’s build along the way, and creating significant improvement in our nation’s shipbuilding capability.”