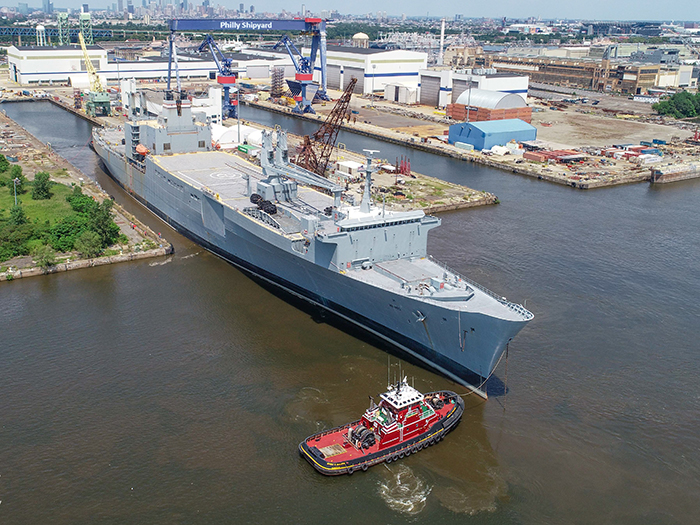 Pollux is a sister ship to SS Antares (above) which arrived at Philly Shipyard in August (Image: InSight Aerial photography)

Philly Shipyard, Inc. has been awarded a drydocking contract for the Ready Reserve Force (RRF) vessel, FSS Pollux. The vessel is owned by the U.S. Department of Transportation’s Maritime Administration (MARAD) and managed by TOTE Services, LLC (TOTE).

The vessel undergoes routine repair and maintenance during its scheduled drydocking every few years. TOTE, as ship manager for MARAD, awarded the contract to Philly Shipyard.

Philly Shipyard says that its objective remains to secure a mix of government and commercial newbuild contracts, while also winning repair and maintenance contracts that allow the yard to continuously utilize its dry docks.

Among the newbuild projects the shipyard would very much like to win is that for the newest class of MARAD training ship, the National Security Multi-Mission Vessel (NSMV). TOTE Services was selected by MARAD as the Vessel Construction Manager (VCM) these ships and will be responsible for selecting a shipyard and ensuring that commercial best practices are utilized to deliver the NSMV on time and on budget.