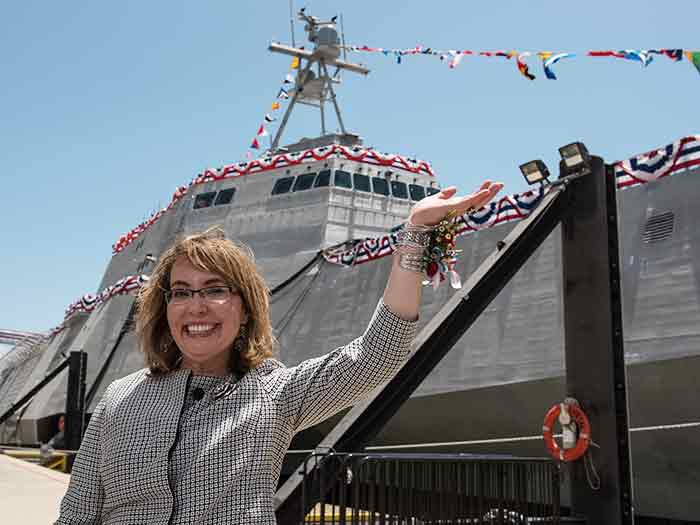 Former U.S. Rep. Gabrielle "Gabby" Giffords waves to a crowd in front of the littoral combat ship, USS Gabrielle Giffords (LCS 10), named for her. Giffords was on the stage as Dr. Jill Biden christened the ship at Austal USA in Mobile, AL, back in June. The 419-foot ship is 16th U.S. naval ship to be named for a woman and only the 13th since 1850 to be named for a living person

DECEMBER 27, 2016 — Austal Limited (ASX:ASB) reports thatr the future USS Gabrielle Giffords (LCS 10) has been delivered to the United States Navy (USN) during a ceremony held aboard the ship at Austal USA’s shipyard in Mobile, AL.

“The Independence-variant LCS platform has gone from strength to strength, as the first LCS variant to be fitted with a Harpoon Anti-ship Missile System and the first US Navy class of vessel to successfully pass shock testing since 2008,” Singleton added.

“We are pleased to receive the future USS Gabrielle Giffords into the LCS class,” said Capt. Harrison, commander, LCS Squadron (COMLCSRON) 1. “Gabrielle Giffords will join her sister littoral combat ships in their homeport of San Diego in 2017, commencing testing and training for deployed operations upon arrival.”

COMLCSRON-1 supports the operational commanders with warships ready for tasking by manning, training, equipping and maintaining all littoral combat ships in the fleet.

Delivery marks the official transfer of LCS 10 from the shipbuilder, an Austal USA-led team, to the Navy. It is the final milestone prior to commissioning, which is planned for 2017 in Galveston, Texas.

“Today marks a significant milestone in the life of the future USS Gabrielle Giffords, as transfer to the Navy occurs and her in-service counter begins,” said LCS Program Manager Capt. Tom Anderson. “I look forward to celebrating the commissioning of this fine ship, along with the ship’s namesake, this coming spring as she makes her way to her homeport of San Diego.”