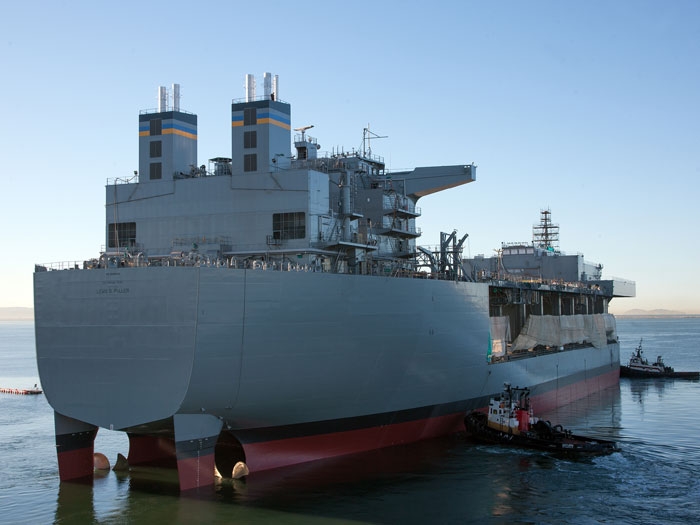 Lewis B. Puller is the first afloat forwarding staging base (AFSB) variant of the MLP. The ship is designed around four core capabilities – aviation, berthing, equipment staging area, and command and control – and optimized to support a variety of maritime missions.

The design of the AFSB variant adds a flight deck, berthing, fuel storage, equipment storage, and repair spaces. With a rotating crew of civilian mariners and military personnel the ship can operate forward almost continuously, providing a base of operations for everything from counter-piracy/smuggling, maritime security, and mine clearing to humanitarian aid and disaster relief.

“The maturity and stability of the Mobile Landing Platform shipbuilding program has allowed for the smooth transition to the afloat forward staging base variant,” said Capt. Henry Stevens, Strategic and Theater Sealift program manager, Program Executive Office, Ships. “Even with the design changes to accommodate the increased capability, this ship is on track to deliver on cost and on schedule.”

During float-off, the launching dock was slowly flooded with water until the ship could freely float for the first time. Following launch, the ship will complete its construction and then go to sea in 2015 to complete a series of at-sea test and trials prior to delivery in 2015.

The ship is designed around four core capabilities – aviation, berthing, equipment staging area, and command and control – and optimized to support a variety of maritime missions.