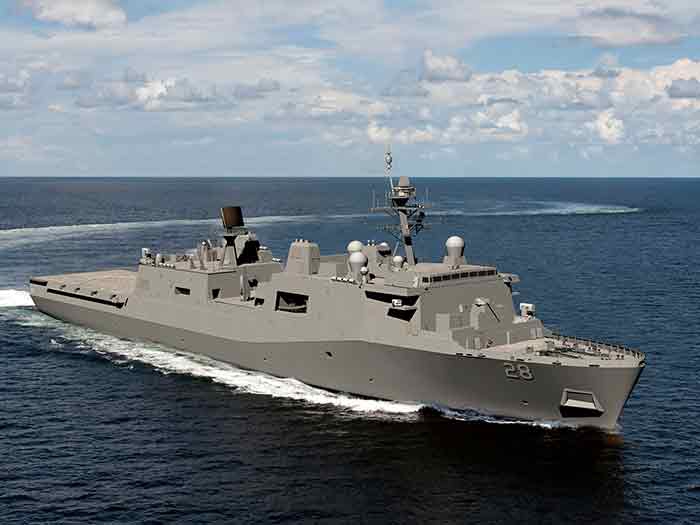 DECEMBER 20, 2016 — Huntington Ingalls Industries (NYSE:HII) reports that its Ingalls Shipbuilding division has been awarded a $1.46 billion, fixed-price incentive contract for the detail design and construction of the amphibious transport dock Fort Lauderdale (LPD 28).

“This contract demonstrates the confidence the Navy has in our shipbuilders’ performance in this program,” said Ingalls Shipbuilding President Brian Cuccias. “Building LPD 28 allows the entire LPD industrial base to maintain a hot production line so that our sailors and Marines receive quality amphibious warships as efficiently and affordably as possible.”

Ingalls has built and delivered 10 ships in the San Antonio class of amphibious warships. The 11th, Portland (LPD 27), launched last year and is scheduled for sea trials in mid-2017.

LPD 28 is named Fort Lauderdale to honor the Florida city’s historic ties to the U.S. Navy, which date to the 1830s and include an important naval training center during World War II.

The San Antonio class is a major part of the Navy’s 21st century amphibious assault force.

The 684-foot-long, 105-foot-wide ships are used to embark and land Marines, their equipment and supplies ashore via air cushion or conventional landing craft and amphibious assault vehicles, augmented by helicopters or vertical takeoff and landing aircraft such as the MV-22 Osprey. The ships support a Marine Air Ground Task Force across the spectrum of operations, conducting amphibious and expeditionary missions of sea control and power projection to humanitarian assistance and disaster relief missions throughout the first half of the 21st century.