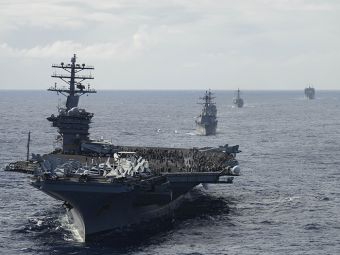 APRIL 6, 2018 – The Congressional Research Service (CRS) has issued a new report “Navy Force Structure and Shipbuilding Plans: Background and Issues for Congress” that looks at the Navy’s latest plans to achieve a 355 ship fleet.

Additional shipbuilding funds are only a fraction of the total costs that would be needed to achieve and maintain the Navy’s 355-ship fleet instead of the previously envisaged 308-ship fleet, says the report. CBO estimated in 2017 that, adding together both shipbuilding costs and ship operation and support (O&S) costs, the Navy’s 355-ship fleet would cost an average of about $11 billion to $23 billion more per year in constant FY2017 dollars than the previously envisaged 308-ship fleet. This figure does not include additional costs for manned aircraft, unmanned systems, and weapons. Depending on total levels of defense spending in coming years, achieving and maintaining a 355-ship fleet could require reducing funding levels for other Department of Defense (DOD) programs.