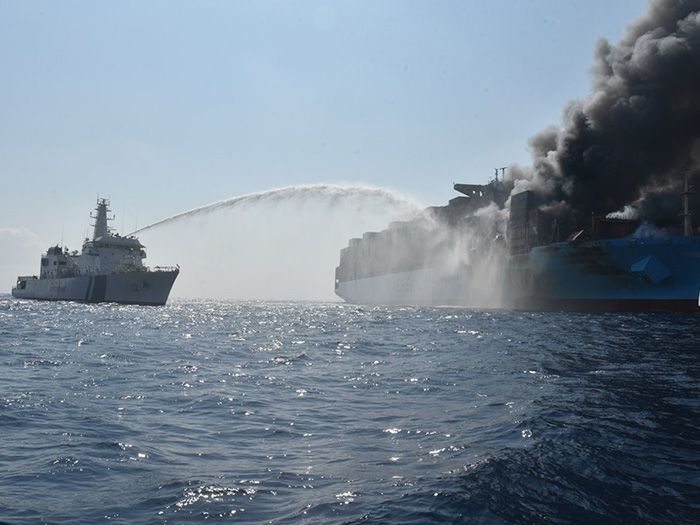 MARCH 12, 2018 — Maersk Line said today that the remains of three of the four crew members missing following the fire aboard Maersk Hunan have been found.

The 15,262-TEU vessel was en route from Singapore to the Suez Canal when a fire broke out on March 6, when the vessel was about 900 nautical miles southeast of Salalah, Oman.

It is with deep sadness that we announce that the human remains of three of the four missing crew members after the fire aboard Maersk Honam have been found on board the vessel. At this point in time our three colleagues are unidentified.

Given the time passed and the severe fire damages of the vessel we must conclude by now that we have lost all four colleagues who have been missing since the fire onboard Maersk Honam which began on 6 March. All four families of our deceased colleagues have been informed.

“Our most heartfelt condolences go out to families of our deceased colleagues. We share their sorrow and do our outmost to support them in this devastating time,” says Chief Operating Officer, Søren Toft.

On land, the medical conditions of the evacuated crew members are progressing positively. All 22 have received medical treatment and the majority have been released from hospitals. Colleagues who initially received intensive care have been moved to a general ward and are recovering well. A crisis psychologist has been made available to all crew.

“Our colleagues that were evacuated to local hospitals in varying conditions of health are improving and we are now preparing to bring them back to their families as their condition allows,” says Palle Laursen, Chief Technical Officer for Maersk Line.

The India Marine Police is conducting a routine investigation of the incident, and they will be interviewing all crew members.

The fire-fighting efforts on board Maersk Honam are progressing. Specialized firefighting vessels remain engaged, with salvage operations led by Smit Salvage and Ardent – two best-in-class companies within maritime salvage operations. Maersk Line is cooperating with the salvors and has two Marine Engineers onsite, working closely with Smit and Ardent.

A full investigation will be conducted to determine the cause of the fire and the impact to the vessel and cargo.