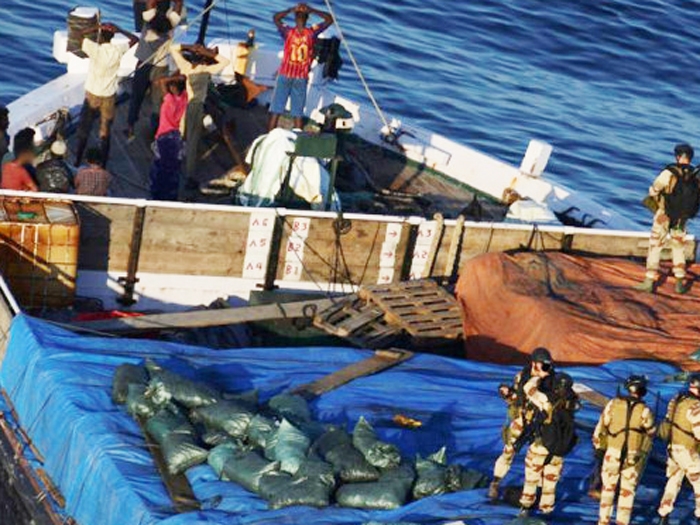 JANUARY 21, 2014 — Though the suspected pirates have now been caught, the main lesson from the first Somali pirate attack of the year is that private armed security teams prevent hijackings.

According to the International Maritime Bureau, “Pirates in a skiff, launched from a mother vessel, approached and fired upon a product tanker underway [since identified as the Navios Tankers managed, 2013 built, 74,695 dwt, Marshall Islands flag, Nave Antropos]. Master raised alarm, increased speed, altered course, activated SSAS, contacted UKMTO and the non-essential crew members mustered in the citadel. The on board armed security team returned fire resulting in the pirates aborting the attack. A coalition helicopter came to the location to assist.”

“In the incident on Friday, a mothership-enabled PAG attacked a transiting vessel with small arms fire. The on board security team took appropriate action and repelled the attack with a graduated response, culminating in an exchange of fire. The pirates ignored deterrence, and continued their approach, firing at the ship. A robust response from the embarked team was eventually enough to encourage the pirate skiff to return to the safety of its dhow mother vessel, allowing the merchant vessel to continue safely on its transit, reporting the incident to relevant authorities.”

Japanese Ship (JS) Samidare was conducting merchant vessel escort duties through the Internationally Recommended Transit Corridor (IRTC) in the Gulf of Aden in support of the Combined Maritime Forces (CMF) Combined Task Force (CTF) 151 when UKMTO received the report of the attack.

JS Samidare responded by heading towards the Marshall Island-flagged oil tanker and launching her helicopter to search for the pirate dhow. All aboard the tanker were safe and the vessel was able to resume her westbound voyage.

FS Siroco was then able to close distance to the dhow and launch its helicopter and boarding team.

Upon nearing the dhow, the helicopter crew and boarding team observed that people on board the dhow were throwing equipment over board, deepening the suspicion that the dhow was indeed the reported pirate mother-ship.

Once the Siroco’s team boarded the dhow, five Somali suspect pirates surrendered and were separated from the dhow’s crew and transferred to FS Siroco for further investigation.

The initial statement from the master of the dhow supported the suspicion that his vessel has been pirated and his crew taken hostage several days ago off the coast of Somalia. He also stated that the suspect pirates were responsible for the attack on the oil tanker the day before.

The EU NAVFOR Force Commander, Rear Admiral Hervé Bléjean, said: “Thanks to an exceptionally effective international cooperation, we showed once more that there will be no safe haven for piracy in the area as long as Counter Piracy Forces remain fully dedicated to their task. I also congratulate FS Siroco with this success.”