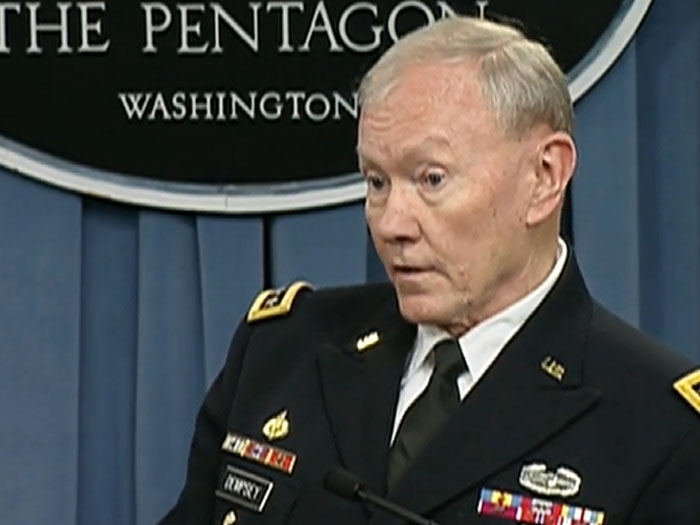 General Dempsey: "We've certainly got the resources in place"

MAY 8, 2015 — Although the release by Iran of the containership Maersk Tigris was confirmed yesterday, the Pentagon said that U.S. military resources can respond quickly to any Iranian acts of aggression toward commercial ships.

The Navy has now ceased to accompany commercial vessels and, at a press briefing with Defense Secretary Ash Carter, Chairman of the Joint Chiefs of Staff Army Gen. Martin E. Dempsey said that the government of Iran stated [it acted to detain the Maersk Tigris] to resolve a long-standing financial dispute and that “there was reason to believe that was true.”

However, the way in which the Revolutionary Guard patrol boats approached the two vessels was, “certainly in our view a violation of international law, which is to say by force,” General Dempsey told reporters.

General Dempsey said the Secretary of Defense approved the U.S. Navy accompaniment mission May 1 while officials looked at whether the Iranian incidents were episodic or could become persistent.

“It doesn’t appear that it’s persistent right now, but we’ve certainly got the resources in place should we need to quickly turn it back on,” General Dempsey said.

The Iranian government must gain control of its [Islamic Revolutionary Guard Corps] land forces and the IRGC navy, if Iran is “going to act responsibly and engage the world” as it claims it wants to, General Dempsey added.