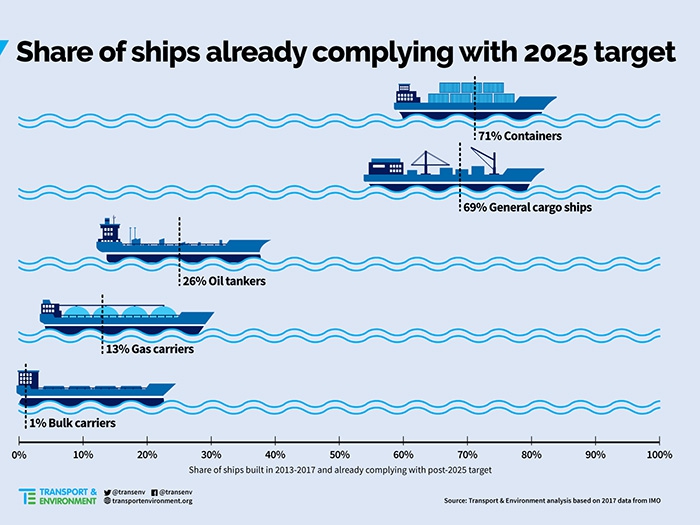 OCTOBER 2, 2017 — Almost three-quarters (71%) of all new containerships already comply with the post-2025 requirements of the IMO’s Energy Efficiency Design Index (EEDI), a new study reveals. Additionally, the best 10% of new containerships are already almost twice as efficient as the requirement for 10 years time.

Rather than commending shipowners for this achievement, however, environmentalists are using it to argue that the EEDI sets too low a target.

The findings are part of a study based on analysis of IMO data and conducted by Brussels, Belgium, headquartered Transport & Environment (T&E), a founding member of the Clean Shipping Coalition (CSC). Established in 1990, T&E represents 50 organizations from 26 countries across Europe, mostly environmental groups and campaigners working for sustainable transport policies at national, regional and local level.

Transport & Environment asserts tHAT shipping sector as whole is one of the fastest growing sources of CO2 and could be responsible for more than 17% of global emissions by 2050 if no action is taken.

“Despite this,” says Transport & Environment, “the International Chamber of Shipping (ICS) and BIMCO are claiming that the sector cannot accept any ‘commitment or intention to place a binding cap on either the international shipping sector’s total CO2 emissions or the CO2 emissions of individual ships.’ ICS has argued that a lack of zero/low carbon technologies is the main obstacle. Yet less than 1% of the 2,500 new ships analyzed in this study reported using even innovative energy efficiency technologies already available.”

The study analyzed ship types accounting for two-thirds of ship CO2 emissions and found that in addition to containerships, 69% of general cargo ships, 26% of new tankers and 13% of gas carriers exceed the EEDI’s 2025 requirements 10 years ahead of schedule. In general, the 10% best performing general cargo ships, tankers and gas carriers are respectively 57%, 35% and 42% more efficient than was required by the EEDI in the period 2013-2015.

The Clean Shipping Coalition (CSC) believes that the performance of the best ships in the fleet would be a good place to start when revising existing or setting new EEDI requirements.

John Maggs, president of the coalition, said: “The EEDI’s current efficiency requirements are so weak that there is no incentive for the uptake of currently available innovative technologies, let alone the development of new technologies. Industry says it can only reduce its climate impact when low carbon technologies are available, but resists policies that will incentivize their development and deployment. You can’t have your cake and eat it. Something has to give.”