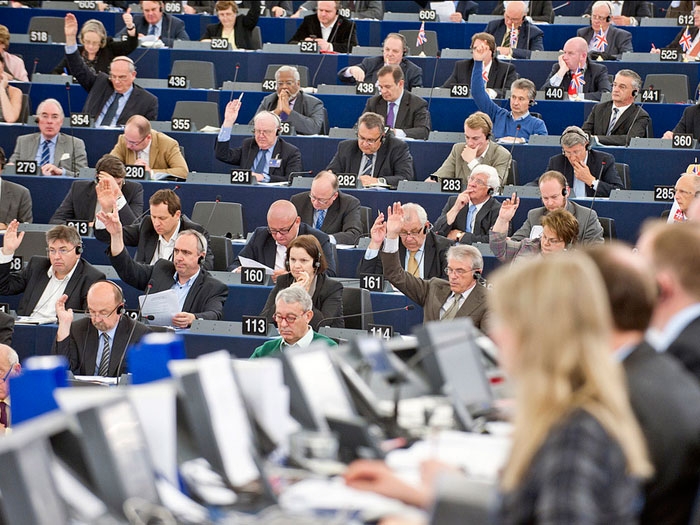 APRIL 28, 2015 — A vote in the European Parliament today has paved the way for the EU to impose a unilateral, regional regulation requiring shipowners using EU ports to monitor and report CO2 emissions each year.

The new rules, already informally agreed with the Council of Ministers, will apply from 2018 on to ships over 5,000 gross tons, regardless of the country in which they are registered, as a first step towards cutting their greenhouse gas emissions.

The text approved today establishes an EU-wide system for monitoring, reporting and verification (MRV) of greenhouse gas emissions from shipping, in order to improve the information about ship efficiency and emissions and to encourage reducing emissions and fuel consumption.

“Maritime transport does not come under any greenhouse-gas emissions reduction measures” said José Inácio Faria (ALDE, PT), who drafted the second reading recommendation approved today. “What we are looking at today is a first step to reduce emissions. If nothing is done, shipping emissions will go up by about 50% by 2030.”

“This legislation is applicable to all ships using European ports, and will be an opportunity to influence negotiations within the International Maritime Organization (IMO). We need to make sure that cooperation with our international partners is kept to, and make sure these steps give rise to an ambitious international agreement.”

The MRV requirements will apply to CO2 emissions arising from voyages to, from and between EU ports. All ships over 5,000 gross tons will be covered, with the exception of:

According to a European Parliament press release, “the plans also aim to minimize the administrative burden on companies and make the measurements as accurate as possible. Ship efficiency – measured in relation to the amount of cargo carried – will have to be reported for all categories of ships. However, detailed specific rules were introduced for each ship category.”Where an owner’s report on ship emissions meets the requirements, an independent verifier should deliver a document certifying compliance. Ships will have to carry these documents on board and will be subject to inspection by EU member states, who will also establish penalties for infringements.

The text approved today will be put to a vote in a forthcoming Council of Ministers meeting in order to come into force on July 1, 2015.

You can read the text HERE

The International Chamber of Shipping (ICS), BIMCO and Intercargo have issued the following statement:

Today’s vote was expected, being based on the political agreement reached between the EU institutions at the end of last year.
However, the shipping industry is still disappointed by the Parliament’s confirmation of the EU decision to pre-empt the current International Maritime Organization (IMO) negotiations on a global data collection system on shipping’s CO2 emissions by adopting a unilateral, regional Regulation on the Monitoring, Reporting and Verification of individual ship emissions – which will also apply to non-EU flag ships trading to Europe – in advance of IMO completing its work.

Until now, with the industry’s support, the IMO negotiations have been progressing well. But there is a danger that the EU initiative will be seen by non-EU nations as an attempt to present them with a fait accompli. The EU Regulation includes controversial elements, such as the publication of commercially sensitive data on individual ships, an idea which had previously been rejected by the majority of IMO governments during a meeting of the Marine Environment Protection Committee in October 2014.

At the IMO, negotiations on additional measures to help reduce CO2 continue at the MEPC in two weeks’ time. It will be vital for EU Member States to explain how the new EU Regulation can be implemented in a way which is fully compatible with whatever might be agreed by IMO for global application, in the interests of avoiding the unhelpful complication of a separate regional regime.

The shipping industry associations reiterate that the latest IMO Green House Gas Study, published in 2014, found that international shipping had reduced its total CO2 emissions by more than 10% between 2007 and 2012, despite an increase in maritime trade.