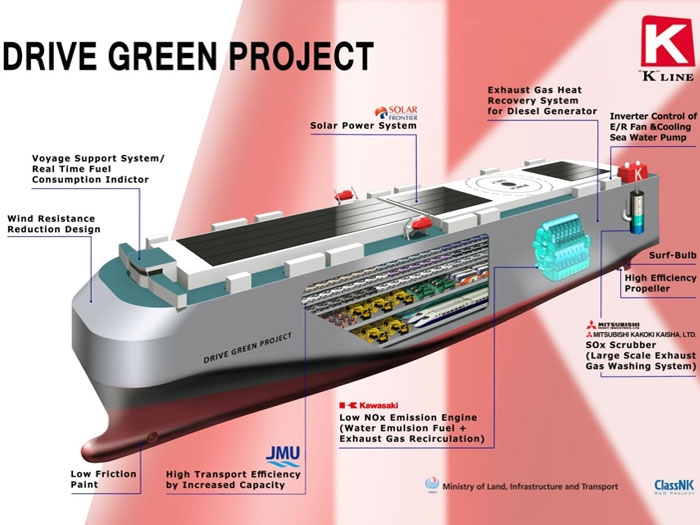 This new joint research project is part of K-Line’s new Drive Green Project, under which a number of innovative green technologies will be installed on a 7,500 unit PCC under construction at JMU for delivery in 2016. The vessel will be the flagship of a series of eight new PCCs currently on order by K-Line. The green technologies are aimed are reducing shipboard CO2 emissions.

In addition to CO2 emissions, SOx emissions are a major concern for shipowners and operators. Under amendments to MARPOL Annex VI which regulate harmful emissions from ships, the IMO will lower the cap on sulfur emissions for vessels in Sulfur Emission Control Areas (SECA) such as the Baltic and North Seas to 0.10% from January 1, 2015. MHI and MKK’s new Hybrid SOx Scrubber system effectively removes sulfur from the exhaust engine exhaust, making it possible for vessels to satisfy the SOx emission requirements while using heavy fuel oil, which is less expensive and more widely available than low sulfur fuels. The new system is the first Japanese-made scrubber system to satisfy the new sulfur emission restrictions.

This project being carried out by K-Line, MHI, MKK and JMU, and ClassNK will oversee the installation of the new Hybrid SOx Scrubber system on the vessel as well as verification of its effectiveness in actual operations. For its part, ClassNK will support the safe installation and operation of the system onboard, as well as make use of data and experience gained from the research to support its certification and emission verification activities.

ClassNK is supporting the project as part of its Joint R&D for Industry program, which provides research support and funding for joint research projects that address challenges faced by the maritime industry.  Since the program’s founding in 2009, ClassNK has supported more than 260 projects carried out with industry partners from around the world.