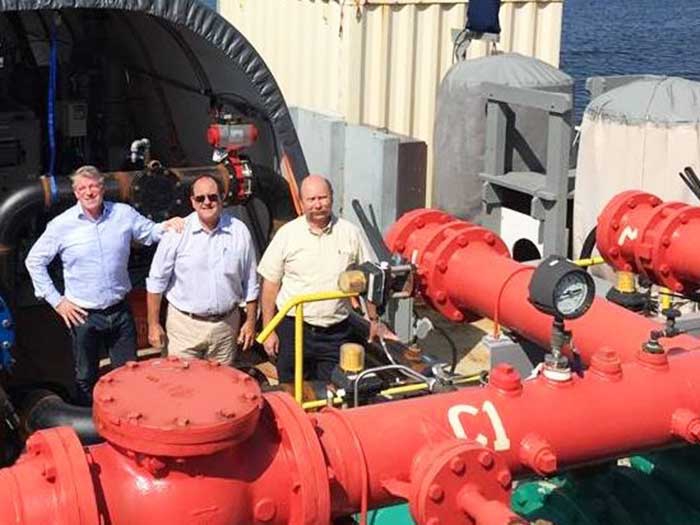 Balpure is an electrolytic disinfection treatment solution. Using a slip stream approach, the system can be remotely mounted away from the ballast lines and split into small sub‑assemblies to minimize other equipment relocation and additional engineering/ship redesigns. The ballast water management system is already approved by the Coast Guard as an Alternative Management System (AMS).

The required testing and evaluations leading to full USCG Type Approval are being completed by the NSF Independent Laboratory at the Maritime Environmental Resource Center (MERC) in Baltimore, MD.

In the land based testing, a Balpure BWTS at MERC will be tested almost every week in different water salinities and with different filters. A series of comprehensive measurements will be taken to ensure that all organisms are killed, that by-products are acceptable and that the water is fully neutralized on discharge to prevent any residual chlorine entering the sea.

The shipboard test is being conducted by a MERC specialist onboard a vessel that has had Balpure installed for a number of years, which is traversing the west coast of the U.S. over a period of six months. De Nora has already completed both engineering design and environmental testing elements of the submission to the USCG.

The BWTS is being tested with filters from multiple suppliers and has already completed testing for one of the three salinities required by the land-based testing.

According to De Nora, Balpure was previously identified by the U.S. EPA Science Advisory Board (SAB) as one of three systems that demonstrated the ability to meet a standard 10 times more stringent than the IMO D-2 standard.

To date, De Nora Balpure has been selected for 48 newbuild LNG vessels and tankers and has recently been chosen for the retrofit of seven vessels.

“Getting both of these sets of testing underway ensures we are on track with our approvals timeline for full type approval from class societies, IMO and the USCG in 2017,” says Lawrence Quinn, CEO, De Nora Water Technologies. “We anticipate land-based testing to be completed with multiple filter suppliers and in all three salinities required this year with shipboard testing to follow shortly after, dependent on the weather conditions and its effect on the organisms present in the water along the route of the vessel on which the tests are being conducted.

“De Nora has installed thousands of seawater electrolytic anti-fouling systems globally across multiple applications including LNG Terminals and coastal power systems. We are therefore extremely confident that the Balpuresystem will continue to progress successfully through this process and meet the most stringent standards upheld by the USCG.”