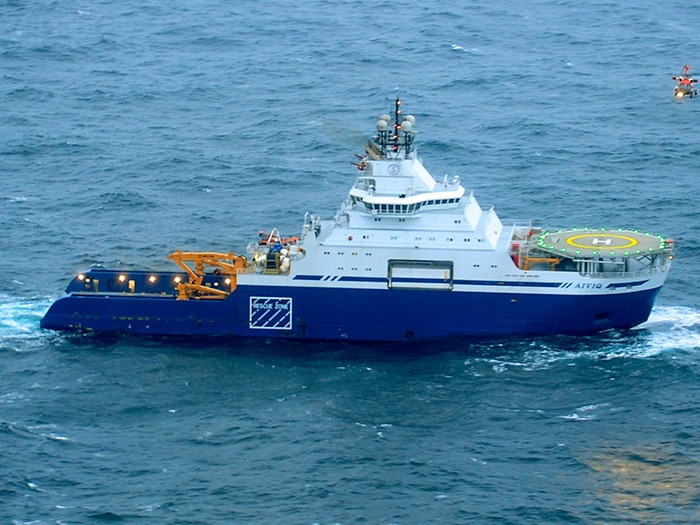 With the U.S. Coast Guard’s single active heavy polar icebreaker, Polar Star, reaching the end of its useful service life there have long been proposals floating around that the Coast Guard acquire an interim vessel until the first of its new Polar Security cutters enter service. The most frequently mentioned candidate vessel has been Edison Chouest Offshore’s M/V Aiviq. The Coast Guard’s FY2023 budget request indicates that this idea is now under very active consideration/

While the procurement for the Coast Guard’s first two Polar Security Cutter is fully funded, the service’s proposed FY2023 budget requests $167.2 million in continued procurement funding for the PSC program, which would be used for, among other things, program management and production activities associated with the PSC program’s Detail Design and Construction (DD&C) contract, long leadtime materials (LLTM) for the third PSC, and government-furnished equipment (GFE), logistics, and cyber-security planning costs.

This sounds much what like what Canada did to get early delivery of a series of intermediate class icebreakers converted from ice class offshore service vessels. The three conversions thus far carried out for Canada were all performed by Davie Shipyards, which had originally made a proposal for the program called Project Resolute.

Here’s how the Chouest vessel was described in the Project Resolute proposal.

“Aiviq was built in 2012 by North American Shipbuilders for use on the Shell Alaska drilling campaign. She is the world’s most powerful, privately-owned icebreaker. With Polar Class 3, this vessel is capable of operatng in the harshest of environments. Built to tow large drilling rigs, M/V Aiviq is perfectly suited as a multpurpose, icebreaking towage and oil spill response vessel.”

On May 3, the U.S. Coast Guard posted a notice saying that it is seeking to identify commercial vessels available for purchase that were constructed at a U.S. shipyard and are capable of operating in or around the Arctic.”

According to the accompanying RFI, the vessels the Coast Guard is looking for should meet the following requirements: