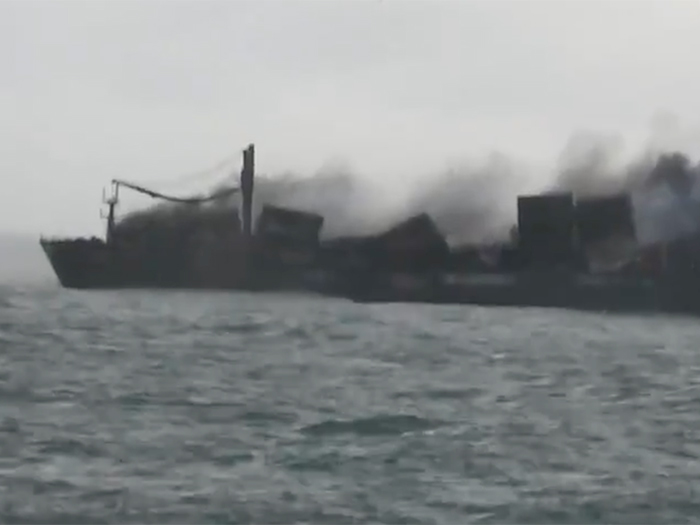 Sri Lanka TV news channels today showed the nearly new containership X-Press Pearl as still continuing to burn, despite firefighting efforts that are now in their eighth day. Pollution from the 2021-built, 2,700 TEU vessel is threatening to wash ashore on tourist beaches and the Sri Lanka Marine Environment Protection Authority (MEPA) is warning that nitrogen oxide gas released by the burning ship will mix with water particles in the upper atmosphere to produce nitric acid, resulting in acid rain.

Local media report that nine Sri Lankan ships and three Indian vessels have been working with international salvage experts to extinguish the fire.

Sri Lanka navy chief Vice Adm. Nishantha Ulugetenne is quoted as saying that he hopes the fire can be put out “within a few days,” even with easing winds in the Indian Ocean making firefighting efforts easier.

Questions are being asked about how much vessel owner X-Press Feeders knew, prior to the vessel’s arrival at an anchorage off Colombo, about a nitric acid leak believed to have been a factor in causing the fire.

It has also emerged that one of the crew members evacuated from the ship has tested positive for COVID-19.

In a statement released this morning, X-Press Feeders said:

“X-Press Feeders, operators of the container ship X-Press Pearl can confirm that firefighting operations to extinguish the blaze aboard the vessel have continued through today despite the ongoing adverse weather conditions.

“Firefighting tugs have constantly been spraying and misting the stricken vessel with support from the Sri Lankan Navy and Indian coastguard, who remain on scene. The ship remains at anchor off Colombo port.

“The crew member who was transferred to a special facility in a military hospital after testing positive for Covid-19 remains asymptomatic and is recovering from a leg injury sustained during his evacuation from the vessel. A second injured crew member continues to recover from his injuries in a local hospital. All other crew members who remain in a Colombo quarantine facility are in good health and are in contact with their families.

“Please note, reports that the vessel was denied entry into Hazira Port in India and Hamad Port in Qatar are incorrect. The ship underwent discharge and loading operations in both ports before continuing on its planned journey to Colombo. Applications had been made to both ports to offload a container that was leaking nitric acid, but the advice given was there were no specialist facilities or expertise immediately available to deal with the leaking acid.”

Local media report that Sri Lankan authorities have lodged a formal complaint with police ahead of initiating legal action against the ship’s captain.